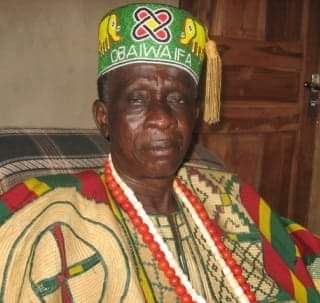 On the 26th of June 2018, it was exactly ten years that the great traditionalist and the Founder/President of the Indigenous Faith of Africa (Agbala Ifa) Ogunda Meji Temple, Apata, Ibadan, passed on to the great beyond. But for family members, friends, followers and associates, it seemed like yesterday that the unpalatable news of his demise came as a rude shock. 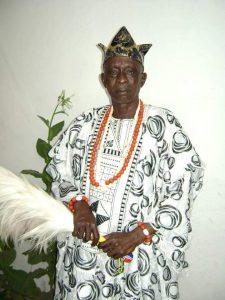 Although, the late Asiwaju Awo of Ibadanland is no longer with us, the memories and evidences of his immense contributions to the propagation of African culture, promotion of Ifa religion and advancement of humanity will linger for long. There is no doubt that Oba Fayemi Bogunmbe came, saw and conquered!
The late Ifa Chief Priest was indeed a blessing, not only to the Yoruba race, but to the entire African continent. The late Asiwaju Awo of Ibadanland dedicated his life to the spiritual elevation and enlightenment of humanity. He used his solomonic wisdom, vast knowledge and diverse talents to promote Ifa religion across the globe, with passion and enthusiasm.
Heaven smiled on the family of late Chief Fasina Awopeju Bogunmbe (The Amukinro Awo of Ibadanland) and late Chief Mrs Olayonu Akanke Bogunmbe, when on the 11th of February 1935, late Oba Ifayemi Bogunmbe was born into the family. Family members rejoiced that Eledumare blessed them with a bouncing baby boy.
The young Bogunmbe started to exhibit uncommon leadership and spiritual qualities at his tender age, and this propelled his parents enrol him for ifa training under the tutelage of Chief Oniwinde Alabi, between 1949 and 1959. That marked a watershed in the life of the young, dynamic and ambitious Bogunmbe.
As a result of his enthusiasm and quest for knowledge, the late Asiwaju Awo of Ibadanland thereafter proceeded among various elders to gain more knowledge of African traditional religions. He had his training as a priest in ifa religion from Chief Gbadebo Dosunmu at Ijebu Ishara between 1959 and 1962.
After many years of rigorous training, Oba Ifayemi Bogunmbe fully became a proficient practitioner in 1962, and also started to train people to become ifa priests and worshippers. He had the privilege of training hundreds of people in ifa religion during his lifetime.
In recognition of his contributions to the propagation of the ifa religion, in 1980 he was invited to the United States of America (USA), as one of the co – founders of Ifa Temple in Brooklyn, USA. That served as an eye – opener for him to later embark on the propagation of ifa religion across the world.
Oba Ifayemi Bogunmbe was the one who laid the foundation and started the mode of worship in ifa religion at the Ose-Meji Shrine in Ibadan, the Oyo state capital (now Ose-Meji Temple, Oja’ba, Ibadan). He started the propagation of the religion through the establishment of temples by individuals.
He used his talents in oratory to anchor radio programs like “Odu Ifa Toni”, ” Ifa ni imole aiye” and many more. The late Ifa High Chief Priest also wrote columns in some newspapers, including Daily Sketch and Gboungboun. All these were aimed at promoting the ifa religion.
The late Asiwaju Awo of Ibadanland became the first person to have an ultra modern ifa temple in 1986, when he built the Ogunda Meji Temple (Agbala Ifa), Apata, Ibadan. This singular act encouraged many other ifa priests to establish more temples.
Expectedly, his contributions to the propagation of ifa religion earned him many chieftaincy titles and honours. In 1994, Oba Ifayemi Bogunmbe was installed as the Asiwaju Awo of Ibadanland and Odofin Awo  Alabola of Ola Ejigbo in Osun state. Also, in recognition of his leadership role, he was installed as the Oba-Iwa Ifa of Oyo state by the then Araba of Iseyin and certified by the Aseyin of Iseyinland.
Other titles the ifa Chief Priest was honoured with included; the Mayegun Awo of Oke-Ogun area of Oyo state, Oba Iwa ifa of Oyo state and Ooto-Awo of Ibadanland. His charismatic leadership style earned him all these!
Baba was honoured with the title of Grand Teacher of Yoruba Temple of Spiritual Elevation and Enlightenment in Washington DC, USA in 1996. He was the President of the Oyo State Association of Therapeutics of African Medicine, the Founder/President of the Ogunda Meji Temple and the first High Chief Priest of the Ose-Meji Temple, Ibadan.
Even in death, the Ifa Chief Priest was honoured, as a post humour gold medal award was conferred on him by Ifa Council, under the leadership of Prof. Idowu Bolofinde Odeyemi, in 2010, two years after his demise. The award was in appreciation of his contributions to the advancement of the ifa religion during his lifetime. Baba was a key founder of the International Council for Ifa Religion.
As part of activities marking the 10th remembrance anniversary, special prayer will be conducted by the Ifa priests from Ibadan temple amalgamated on the 26th of June 2018  at the Ogunda Meji Temple  Auditorium, The Bogunmbe family will thereafter organize a reception to host friends and associates. 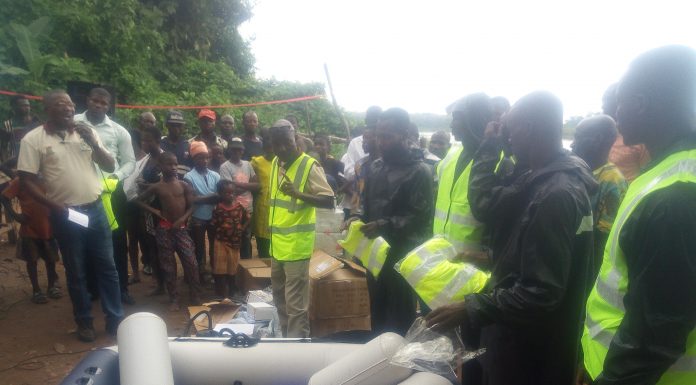 Triumph of Saraki Over Political Persecution and Needful Lessons . ...

Legality of Marijuana in Nigeria: A Legal Opinion. By Kayode Ajulo, PhD