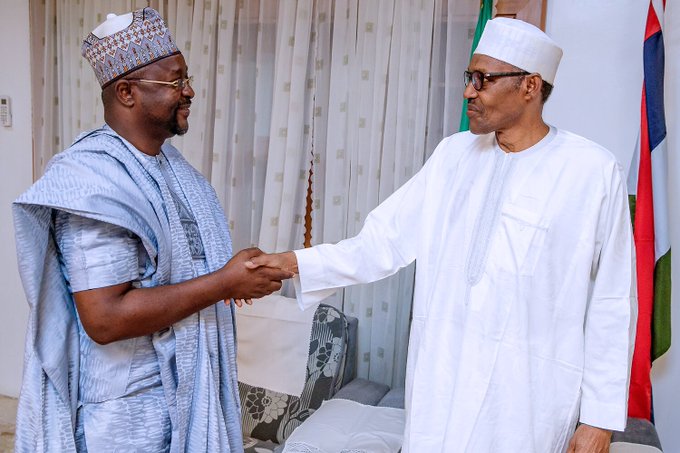 Dare replaces former sports minister Solomon Dalung who was not considered for re-appointment.

A fellow of the Prestigious Harvard Nieman Journalism fellowship, 53 year old Dare is expected to hit the ground running as Team Nigeria is currently competing for laurels at the ongoing African Games in Morocco while many say preparation for the Tokyo Olympics next year as well as qualifiers for the next world cup Qatar 2022 are some of the issues that are likely to hit his table in a jiffy.

Until his appointment, he was the Convener of the Social Media Clinic (SMC), a Media/Information Technology (New Media) initiative committed to educating private citizens on IT development and also in the use of telecommunication as an information tool and creating awareness on how to responsibly use the platform provided by advancements in Information and Communication Technology (ICT). He combined this role with being the Chief of Staff / Special Adviser (Media) to former Lagos State Governor, Ahmed Bola Tinubu.

He graduated with a Bachelor of Science (BSc.) in International Studies from Ahmadu Bello University in 1991. He then proceeded to obtain a Master of Arts in Law and Diplomacy from the University of Jos. He was a Freedom Forum Fellow and Visiting Scholar, School of Journalism – New York University (NYU) in 1998. He later proceeded to Harvard University under the prestigious Harvard Nieman Journalism Fellowship between 2000 and 2001 where he studied Media and Public Policy.

Mr. Dare has decades of multimedia journalism experience spanning about 25 years (1991 and 2016) when he was nominated as Executive Commissioner.

He was the Chief, Hausa Service, African Division, Voice of America (VOA) in Washington, DC from 2001 to 2009, where, apart from directing the production of radio and online broadcast news and programs daily, he designed and implemented the adoption of new IT and Telecoms tools for international radio news-gathering and information dissemination to boost audience size and expand reach. He supervised the work of eleven (11) International Radio Broadcast Journalists based in Washington DC alongside 24 reporters/stringers based in West Africa for VOA.

He was a founding member of the Nigerian weekly magazines The News and Tempo in the heady days of the military, where he served as Editor, Tempo magazine and pioneer Online Editor/General.

He had been reporter/columnist with several international publications such as The Nation magazine in New York and a production editor/writer with the European funded Fourth Estate magazine during the struggle against military dictatorship in Nigeria.

Mr. Dare is a recipient of many awards and has been recognized internationally, including being identified as one of the 50 Leading Nigerians in North America 2010 in commemoration of Nigeria’s 50th Anniversary. He also won the Voice of America Meritorious Honor Award 2009 in recognition of his skillful leadership and outstanding performance; and he also bagged a Committee to Protect Journalists Citation in 2000 by the New York based organization in acknowledgement of his courage as a journalist.

His published works include; Making A Killing – The Business of War (Public Integrity Books, Washington DC – March 2003), which won the Sigma Delta Chi International investigative award; Guerrilla Journalism: Dispatches From The Underground (Xlibris Corporation, USA. – March 2007); We Are All Journalists – Africa In The Age Of Social Media (Oxford University Press, UK – 2011) the product of Mr. Dare’s research at the Reuters Institute for the Study of Journalism, Oxford University; and Datelines – A Journalists’ Narrative (May 2016). Ongoing works include; Butting Heads – Traditional Media Versus Social Media – Who Blinks First and Marriage that Works – The Convergence of Telecoms & ICT.