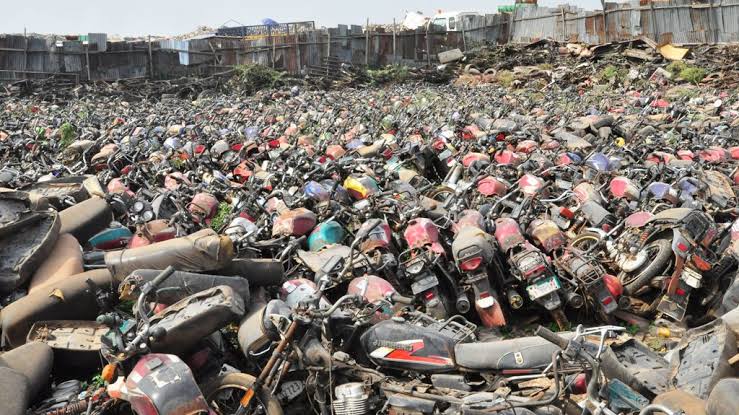 …As Motorists React to Agency’s Operations
The Oyo State Road Traffic Management Authority (OYRTMA),, has revealed that about 395 vehicles and 60 motorcycles have been Impounded since January 2019.
This was made known by the Director, Administrative and Supply, OYRTMA, Mr Tunde Aiki in an interview after one of the agency’s operations on Wednesday in Ibadan, Oyo State.
The operation which took place around Agodi-Gate area, Ibadan saw the agency’s officials  arrest traffic law offenders even while it rained.
OYRTMA held the responsibility of maintaining the State’s road traffic laws as well as maintaining orderliness and control in the road traffic system of the state.
Speaking further, Aiki noted that the existence of the agency was not to generate revenue for the government through collection of  fines from  traffic law offenders as most people believed, but to increase the compliance level of road users to traffic laws.
“We have discovered that more commercial road users violates basic traffic laws, especially those who do not make use of the designated bus stops as their pick up or drop off points for passengers and offences committed by private motorists are more grievous which include leaving one’s lane to face an oncoming vehicle and parking inappropriately on the road.
“We want to appeal to pedestrians and motorists to always take into consideration the safety of other road users as well as acquaint themselves with the traffic laws of the state.”
Meanwhile, some road users who spoke with our correspondent  commended the agency for their efforts in ensuring a traffic friendly environment in the state but however called on the government to create more motor parks for both commercial and private users.
A private motorist, Mr Obinna Chukwu said “We know that what  OYRTMA is doing is for the good and safety of everyone, but most times the unavailability of motor parks especially for private motorists causes a lot of issues. So if the government can build motor parks at designated and busy places in the state, it will go a long way to reduce the clumsiness on our roads”.
ALSO READ  Makinde Appoints Nureni Adeniran as SUBEB Chairman
Previous Post

Full List of New Ministers And Their Assigned Portfolios