They say if Buhari wins election, they will all go to prison. That is why they are running from APC to form a formidable force against us. Most of them hid money in latrines, we don’t need thieves in APC; they should go. If they don’t go, we will pursue them out as two good men are better than 10 and 10 good men are better than thousands. (Oshiomole, 2018)

There is no best time to see the hypocrisy of Nigerian leaders than now when politicians are hiding under the camouflage of ‘massism’ to pitch their tents where the interests of their inner caucus can be best served, protected and entrenched. While Nigerians suffer economic crunch, elevated unemployment, heightened poverty and uncertain tomorrow owing to untamed insecurity, both the ruling All Progressive Congress (APC) and the seeming opposition party, Peoples Democratic Party (PDP) opened their windows to party switching. Each party is busy scavenging for individuals with the requisite political capital that can make victory happen in 2019.

The ultimate concern is the political worth calculated in terms of the number of votes the new ‘player’ can bring to the club to win the champions league in 2019. In all this, it is immaterial whether the individual switching camp is of questionable character or not. Funny enough we are inundated with name calling: the defectors have been reconstructed by the ruling APC as ‘bad eggs’, ‘thieves’ and ‘corrupt’. The question is how come a ‘good person’ of three years relationship while in APC suddenly becomes labelled as ‘thieves’?
In the richly oral tradition of the Yoruba people of southwest Nigeria it is rightly observed that the outpouring of vituperations in social relationships must have been laced with discord (ìjà lódé ni orín dí òwe). Peter and Paul Okoye (P. Square) provides insight into the importance of the presentation of the self in anticipation of the evaluation of others. In their song ‘Nobody Ugly’, P-Square presents to us those ‘not beautiful’ but who utilise technology to enhance beauty. With technology-enhanced beauty, people are deceived by the presentation of the self as against the real person.

For instance, a black person could use image modifier to become light skinned thereby deceiving viewers. Using this analogy therefore, nobody is ugly until we say the person is ugly. Those who defected have become ‘ugly’ from their beautiful old-self. But the ugly can also be painted as beautiful (if a PDP member defects to APC) depending on the motive behind such remarks. Complimentary and uncomplimentary remarks are therefore not entirely objective but subjective. The same thing happened to the incumbent President, Muhammadu Buhari when he was presented as ‘dictator’, ‘anarchist’, and someone who will Islamise Nigeria. By 2014, Buhari was repackaged from a ‘sinner’ into sainthood wearing a messianic robe.

Even Buhari in his Chattam House speech said he had become a converted democrat. This transformation affirms the ‘nobody is ugly’ thesis. It shows the hypocrisy of the APC national chairman who never saw the need to invite the police to prosecute the defectors before leaving APC since he was sure they are ‘thieves’.

The ruling APC has sufficiently demonstrated its ability to perfume those loyal to it while fumigating those found opposed to it. The comrade senator, Shehu Sanni rightly observed this when he asserted that the anti-corruption fight of the ruling party is fraught with jaundiced considerations. He opined that while the presidency deodorises friends of the executive, it deploys toxic spray on perceived enemies and labels them as anti-people and corrupt in order to pitch them against Nigerians. The social construction of what is criminal, who is criminal and who is not deviant are all a function of power. Those who hold the lever of power determine those to be labelled as criminals and those to be prosecuted or not. This has played out in cases such as those involving Babashir Lawal, the back-door entrance of Abdulrasheed Maina, the construction of Fulani-herdsmen by the presidency, and the ongoing allegation of forgery against Finance Minister Kemi Adeosun among others.

How time flies. The political ‘blessings’ of APC in 2015 seem to have decided to return to PDP. Their return migration, no doubt hit the APC below the belt even though the President and his party chairman have been trying to portray it as inconsequential. While President Muhammadu Buhari (from ANPP to CPC to APC) and Asiwaju Bola Ahmed Tinubu (from AD to ACN to APC) may be laying claim to their consistent ideological leaning despite doing political re-alignments to boost their political goals, the ex-labour leader turned party chairman had migrated in a partnership agreement from Labour Party to the broom party in actualising his gubernatorial ambition. The good eggs of yesterday have now become labelled by President Buhari as bad eggs.

Adams Oshiomole purported that the reason for defecting is the fear that the ‘corrupt’ will be jailed if Buhari wins in 2019. The question is why were they not jailed while in APC? Why did APC allow them to enjoy for three years and only began campaign of (im)morality against defectors when they had found solace elsewhere? Why did Samuel Ortom suddenly become a non-performing Governor because he defected from the jaundiced judgment of Oshiomole and not because of the failure of the APC controlled federal government to stop carnage in Benue state? If Senator Godswill Akpabio decides to ‘sweep’ for President Buhari and Oshiomole, he will have become a ‘saint’ and drop the robe of ‘sinner’ despite being painted as ‘ugly’ by the APC and with EFCC cases and threat to confiscate his properties owing to alleged corruption! If Akpabio is treated as a golden egg today, he will be bad egg tomorrow when the relationship becomes strained. Abeg, nobody ugly!

Claiming to be saintly and hobnobbing with those Oshiomole called ‘thieves’ is trading Nigerians for bad governance by the ruling elite. Their association has not been beneficial to Nigerians in the last three years where many have lost their jobs and died due to insecurity. It is to the credit of the saints and the sinners that we now rank as one of the chronic poverty capitals of the world. Between 2015 and now, corruption has levitated with our global ranking unimpressive indicating that even outside political space, the number of sinners have increased. Lack of respect for separation of powers, disobedience to court pronouncements and elevated propaganda are regular features. How do we make unpaid civil servants become saints when they are governed by sinners?

The ruling house lives with sinners yet wants grace to abound. This perhaps explains why little progress is made. For 2019, we need a true (not packaged) saint to give Nigerians world class infrastructure in health, education, power and attend to the impending dangers of youth unemployment. To Nigerians, we are yet to see the difference between the saints and the sinners. The way they practice their politics is precisely the distinction between six and half a dozen! 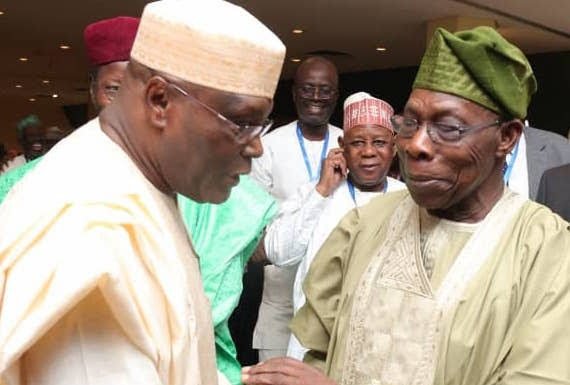