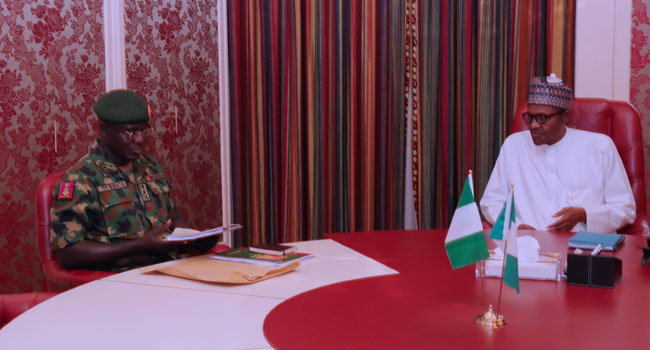 President Muhammadu Buhari meets with the Chief of Army Staff, Lieutenant General Tukur Buratai at the Presidential Villa in Abuja, the nation’s capital.

President Muhammadu Buhari on Monday met with the Chief of Army Staff, Lieutenant General Tukur Buratai over the security situation in the country.

The meeting comes amid the spate of kidnapping, terrorism, banditry and other criminal activities in several parts of the country.

After a closed-door meeting with President Buhari at the Presidential Villa in Abuja, Buratai told State House Correspondents that the military needs civilian involvement if an end to the insecurity is to be achieved.

Buratai, who said 90 percent of kidnappers, bandits, and armed robbers are Nigerians, called on the citizens to share information on criminals with security personnel.

According to him, he briefed the President on the security situation in the country.

President Buhari in a meeting with Service Chiefs and other security heads in June had warned that he would no longer tolerate the escalation of insecurity in the country.

While warning against the further deterioration of the security situation in the country, President Buhari told the heads of security agencies that their “best is not good enough.”

He also frowned at the lack of synergy among the security heads, asking them to work together in order to bring to a halt the security challenges facing the country.

Last Saturday, it was reported that armed bandits allegedly killed 16 soldiers and injured 30 in an ambush around Shimfida in Jibia Local Government Area of Katsina State.

Kidnappers had struck in Kaduna a few days ago allegedly abducting over six people including a policewoman.