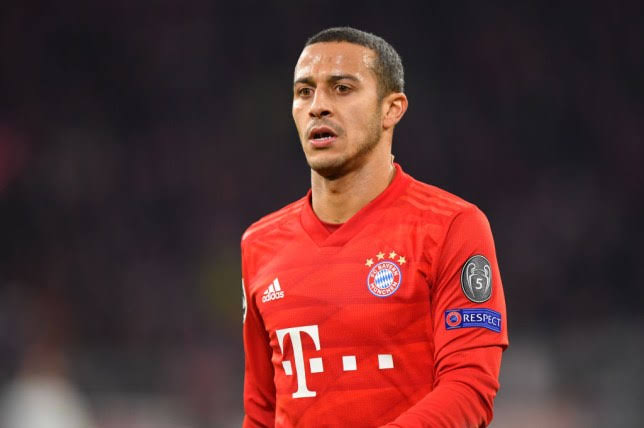 12
SHARES
1.9k
VIEWS
Share on FacebookShare on TwitterShare on WhatsApp

Bayern Munich Star Midfielder, Thiago Alcantara has sent a goodbye message to the club and his supporters ahead of his transfer to Premier League Giant, Liverpool.

Recall that the 29 years old, Spain international, was on the verge of a move to Anfield after the Premier League champions agreed a £27m fee with Bayern.

It looks like confirmation of Thiago’s arrival on Merseyside is now imminent after he took to social media to bid farewell to Bayern supporters.

Addressing fans of the European and Bundesliga champions via his official Twitter account, he confirmed his impending departure.

Thiago wrote: “Yes, it has been the most difficult decision of my career. I decided to close this chapter in this marvellous club. The club where I grew and developed myself as player during the last 7 years.”

“Triumphs, joy and also hard times. But what I am most proud of is that I arrived in Munich as a young man full of dreams and now I will leave completely fulfilled with a club, a history and a culture.

“Here I learned to love a tradition, that I am now saying goodbye to but I will never forget. Mia San Mia.

“I have had some fantastic moments in this city at [Bayern’s training ground] and in our beloved Allianz Arena with my Bavarian family who treated me so well and loved me every second.

“My decision is purely of a sporting nature. As a soccer player, I want new challenges to develop myself further. Bavaria will always be my home.