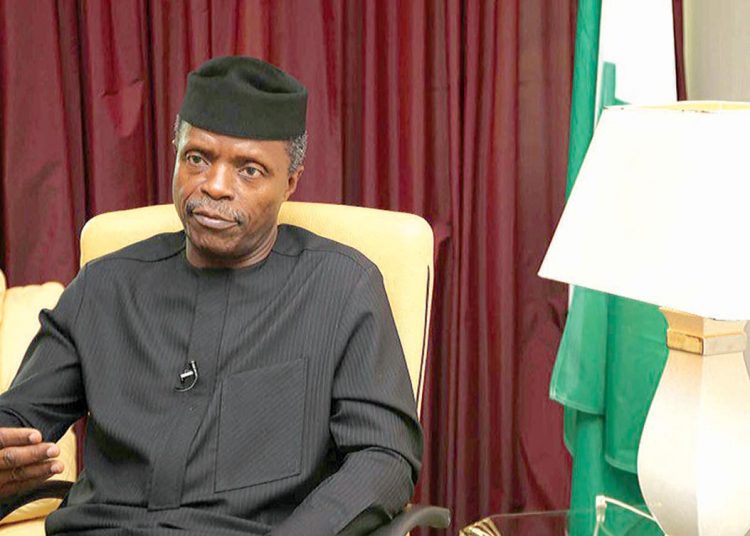 Communications Minister, Barrister Abdur-Raheem Adebayo Shittu has described the Acting President, Prof. Yemi Osinbajo as a very dependable ally of President Muhammadu Buhari. This was contained in the Minster’s  congratulatory message on the occasion of his 60thbirthday.
He described Prof. Osinbajo as a God sent able lieutenant to President Muhammadu Buhari in the task of salvaging the country at this critical period of our national life.
According to the Minister, the Acting President has not disappointed the All Progressives Congress (APC), on which platform he was jointly elected with President Buhari and several millions of Nigerians in discharging his duties.
He said,” A visionary leader could have his mission transformed into action only when he has dependable assistants that shared his visions and are ready to work tirelessly to drive that vision to achieve success.
“President Buhari is lucky to have an hard working, resourceful, highly cerebral and dependable ally in Prof. Osinbajo as his Vice President and the two of them have been fixing the country since coming to power about 20 months ago. Honestly speaking, the two of them are a perfect combination”.
Barr. Shittu noticed that in spite of his age, the Acting President is very agile, mobile and sound minded, attributes he said, has been helping him in performing excellently in office.
The Minister while praying for sound health for Prof. Osinbajo to further discharge his duties, urged all Nigerians to pray for both President Buhari and his Vice to succeed in taking the country out of economic woods.
“I wish the Acting President a long life, good health and ability in the service of our great country”, he said.
ALSO READ  Oyo Police Recovers 10,000 Live Catridges, Arrest 4 Ileagal Ammunition Dealers in Ibadan
Tags: Adebayo ShittuOsinbajo