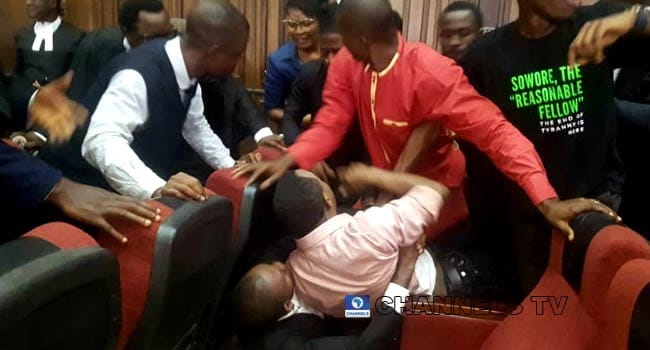 41
SHARES
322
VIEWS
Share on FacebookShare on TwitterShare on WhatsApp

Socio-Economic Rights and Accountability Project (SERAP) has “strongly condemned the violent re-arrest today of Omoyele Sowore and his co-defendant, Olawale Bakare by officials of the Department of State Services (DSS), and the apparent harassment and intimidation of Justice Ijeoma Ojukwu.”

Armed DSS officials reportedly stormed the courtroom, causing pandemonium at the court and physically assaulting Mr. Sowore. The judge reportedly had to take cover. She had earlier ordered the DSS to release Sowore within 24 hours and also pay him N100,000 for improper legal conduct. The DSS then released Mr. Sowore only for him and his co-defendant to be violently re-arrested.

Reacting, SERAP deputy director Kolawole Oluwadare said: “The appalling invasion of the courtroom and the ill-treatment of Sowore and Bakare is a blatant attack on the rule of law and the sanctity and integrity of our justice system. An independent judiciary, free from intimidation and harassment is a basic precondition to a functioning democracy under the rule of law.”

SERAP’s statement read in part: “The violent re-arrest of Sowore and Bakare right inside the courtroom is a textbook case of a mockery of justice and abuse of the judicial process. It drives home the failure of the Nigerian government to fulfill its constitutional and international human rights obligations to respect citizens’ human rights and observe the rule of law.”

“What happened in the courtroom is a fatal blow to human rights and the independence and integrity of the judiciary. SERAP is seriously concerned that the Government of President Muhammadu Buhari is not observing fundamental international human rights and due process standards.”

“The United Nations Human Rights Council, African Commission on Human and Peoples’ Rights and members of the international community should urgently put pressure on the Nigerian authorities to end serious violations and abuses of human rights and threats to the rule of law in Nigeria.”