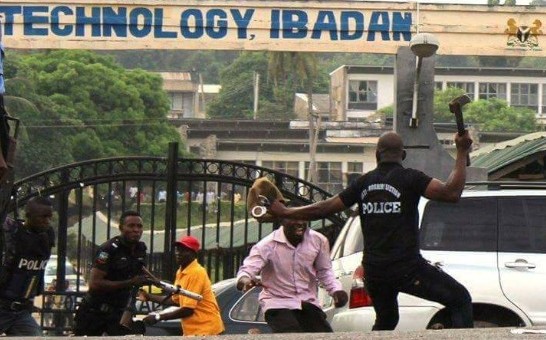 A member of staff of the institute Mr Olanrewaju Johnson and Police officers during the clash , photo credit ;facebook.com/DanielOluwaleke Akindele

Scores of members of staff and students of staff of Institute  of Agricultural Research and Training (IAR&T), Ibadan on Monday sustained various degrees of Injury as some overzealous men of the Oyo State Police Command invaded and clashed with students of the Federal College of Agriculture, Moore Plantation, Apata Ibadan.

It was gathered that trouble started as early as 7;30 am on Monday when students of Federal College of Agriculture that shared the same premises with IART&T and Federal College of Animal Health and Production Technology were protesting within the premises against the leadership of the Provost of the institution, Dr. Babajide Adelekan.

The students were complainng of protracted strikes by workers of the institution and various crises that have been rocking the Adelekan’s administration.

An eye witness who briefed our reporter on condition of anonymity informed that students of the institution were protesting peacefully and blocked the Apata-Dugbe Road when the police came to disperse them.

An industrial training (IT) student, a male staff Mr. Lanre Johnson and ten other staff whose names are still being collated as at the time of filling this report sustained various degrees of injuries on their heads, legs, toes and arms.

Five cars belonging to staff of IAR&T were also seen by our correspondent damaged during the melee that lasted for over two hours.

When our reporter visited the site, various injurious items such as broken bottles, stones and sticks which the two litterer the road and the premises while mobile police officers from Dugbe, Oluyole , Apata  were on ground to prevent further breakdown of law and order

It was gathered that  the crisis in the college has been on for over two years which has made the Federal Ministry of Agriculture to wade into the crisis.

“It has developed to this level. The only thing that I know is that I was told that the students were tired of staying at home. And they are tired of coming to the college doing nothing. Therefore they have to protest”. A source said

The Executive Director of IAR&T, Professor James Adediran who quickly cut off his journey to Abuja described the incident as unfortunate.

Adediran while speaking with journalists  condemned the ugly incident which seriously affected activities in the institution, staff and other members of the institute.

He noted that it was unfortunate that policemen could not differentiate between staff of the institute and students and staff of the College of Agriculture who were protesting.

Adediran noted that his staff were about to resume for work when the policemen came to invade the premises without spearing anyone.

He said that he had to quickly return from his journey to Abuja when staff of the institution called him about the situation on ground.

Adediran said “This morning, our staff came to their places of work and unfortunately the gates were locked, they had to look for ways to enter into the premises, and unfortunately we lean that students were on rampage shouting and demonstrating on the main road, so it was difficult to enter.

“And personally, I was not around, I was on my way to Abuja and I had to return back after Ilesa, I was already traveling, I had to return on my way. When I came back I was told that the police enter the premises and started shooting and to be sincere I want to say that two of our staff were shoot, they were being attacked.

“What really happened is that there were stray bullets, the two of them, one on the head and the other one in the abdomen. The two of them are still in the hospital. They were rushed to the hospital, they were now receiving treatments.

“I was told that they are recovering I am to visit the hospital to know the state of their health status.

“As I told you, two of our staff are in the hospital, one was hit on the leg and the other in the abdomen. Some were injured on the heads and the hands”.