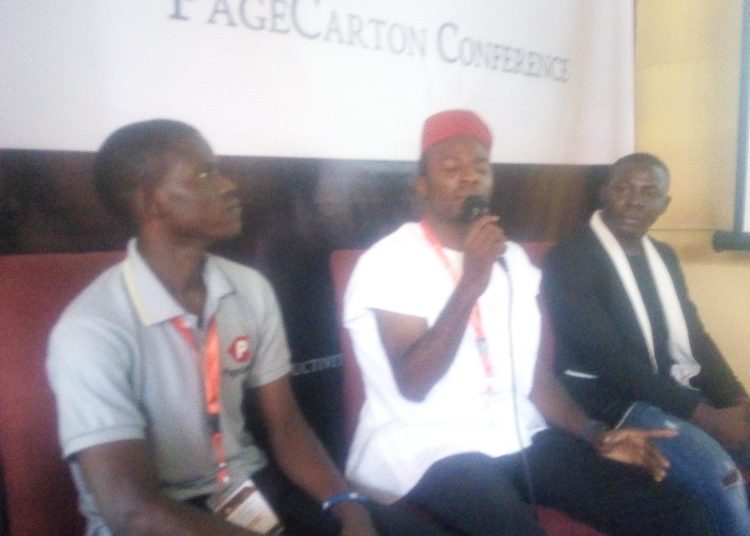 The event was used to lauched a tool, called PageCarton, a Nigerian alternative to popular tools like wordpress and blogger. It was demonstrated on Tuesday at the beginning of a five day tech conference organised to train young people on web related matters.

PageCarton was founded in 2011 in Ibadan by Ayoola Falola. It was first known as Vanity Web and later named Ayoola page world before its current name, PageCarton.

Falola who spoke at a press conference preceding the workshop, noted that PageCarton has features that makes it easy for anyone without coding or programming skills to create a website or blog within minutes.

The founder, who was flanked by some of his partners, Isaac Daramola and Mayowa Olabamiji, explained that the platform had grown since inception, and has been used and downloaded across Nigeria and Asia. He however regretted that it had struggled with acceptability among Nigerians who erroneously consider it inferior to known platforms.

“The major challenge is acceptability. Some people don’t take it serious because it is a Nigerian brand. But what I can say is: just try it. If they try it, they will enjoy unique features like web security, and ready made templates. Besides, you don’t need to know how to code before you use PageCarton to create great websites or blogs within minutes,” he said.

He added: “It is world class, open-source and easy to use. You don’t need external apps or databases. Just log on to www.pagecarton.com to sign up or www.pagecarton.org to download and install.”

He explained that he and his team have however been trying their best to bring the platform closer to people by organising occasional boot camps and workshops like the ongoing one.

According to him, the ongoing conference is the maiden edition. It will feature keynote addresses, panel sessions and practical workshops on topics like Web security; Funding Tech-based Start-ups; Experiences with coding with PageCarton, Tech Appreciation in a Corporate environment, building themes and front-ends with PageCarton, and lots more.

Speakers expected at the event include Pacqueens Irabor of Bank of Industry; Francis Madojemu of iBridge Hub; Tolulope Ogundiji of Examtone; Deborah Daniels of HGIITS and several others.

Next year’s conference will hold in Lagos, Falola said.