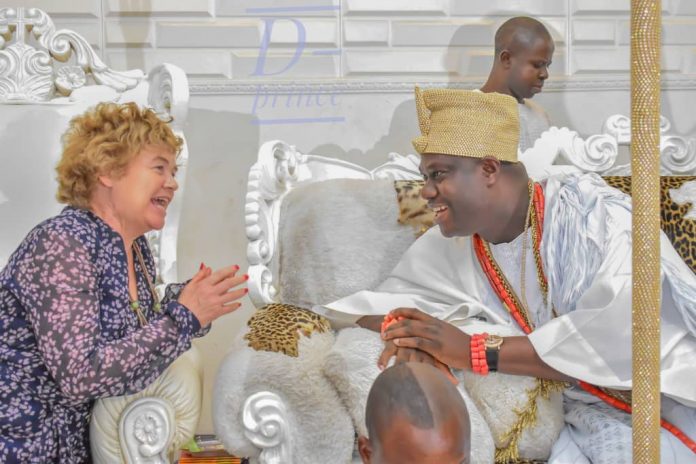 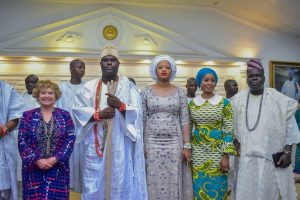 While receiving Mrs. Laing who is the first woman to take up the position as a British High Commissioner in Nigeria, the African foremost monarch described the Nigeria-UK relationship as cordial, expressing his belief in the High Commissioner’s ability to uphold and and improve on it. 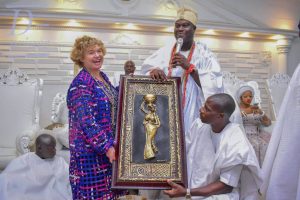 Flanked by his queen, Olori Naomi Ogunwusi(Yeyeluwa), Ooni Ogunwusi who is the Co-Chairman of the National Council of Traditional Rulers of Nigeria(NCTRN) congratulated the new British Prime Minister, Mr Boris Johnson on his emergence, urging him to not to renege on his promise to the world especially as regards to the Africa’s interest.

“I love the Prime Minister’s inaugural speech that power belongs to the people. I want to use this opportunity to implore him and his team to work hard to be able to deliver on their promises to the world.

“Once again, I congratulate him and I pray that the Almighty God will be with him and make him succeed in this new capacity and in his future endeavours.

“Similarly, I commend the British High Commissioner to Nigeria for her good works particularly to strengthen the strong cordial relationship between the United Kingdom and Nigeria.

“You are very much welcome to your home Ile Ife, the cradle of human race and natural headquarters of Yoruba nation safely. I want you to during your tenure here in Nigeria work with us for peace, for love and for progress so that a good history can be made of your tenere as the British High Commisioner to Nigeria” Ooni noted.

Earlier in her address, Mrs. Catriona who was thrilled by several cultural displays from entertainers explained that the Nigeria-British relationship remained strong, adding that she has mapped out plans to further strengthen it.

“I am going to focus on three things first of which is to strengthen our commercial relationships by encouraging British companies to come here.

“Secondly is to support Nigeria to combat her security challenges especially in the North-East, and the third is what we are doing today which to strengthen people-to-people relationship especially in the area of culture”. She said.

Olowa of Igbara Oke, Oba Francis Adefarakanmi, Professor Muib Opeloye and the wife of the immediate past Governor of Ogun State, Mrs. Olufunso Amosun were among the dignitaries that witnessed the event. 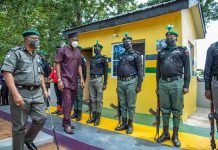 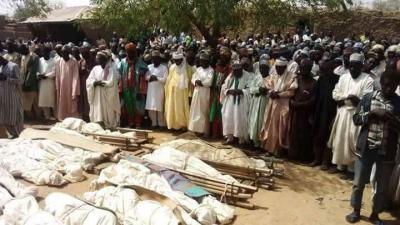 Zamfara: Atiku laments disregard for the sanctity of life

How did Ibadan and Oyo state become this peaceful? by  Olusoji Akinloye.