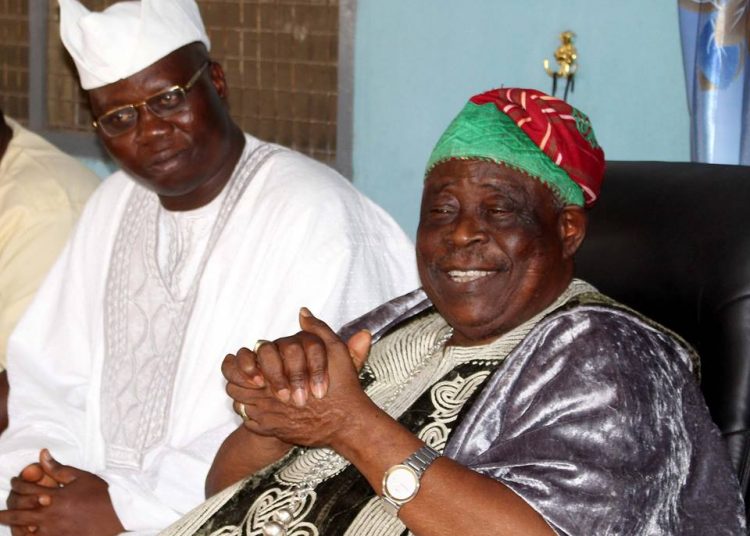 Gani Adams who was well received at the Ogiyan of Ejigbo land’s palace was treated to a special prayer session with Oba Oyesosin, who has been superintending over the affairs of the ancient town for 44 years,  showering encomiums over the Aare whom he said would live long with the Aare mandate, adding  that the Aare title is a title for powerful people and “because i know you are capable of holding the office because of your antecedents, i charge you to use the office to foster unity among the yorubas”

On his part, the Timi of Ede who said “the Aare ona Kakanfo of yoruba land title is not a small title especially to those who know” posited that “nobody can shove Gani Adams aside if we talk  about fighting for the good of yoruba land” hence his submission that with God on  his  side he  will succeed.

According to him: Alaafin is my father, i can never go against his decision. What we call Ede today is by the grace of God and Alaafin.

Pledging the support of Ede for the new Aare, Timi  charged him to continue to fight the cause of Yoruba which he is noted for and eventually earned him what he described as “the  powerful title”

In the same vein, the Oluwo of Iwo said he has been following  the Aare’s activities regarding his struggle for the restoration of the dignity of the yoruba race.

According to him, there is no war to fight like the Aare Ona kakanfo of  old did, adding  that,  he wants the Aare to put into use, the  braveness and ideas which he is noted for,  to solve the problem of the yoruba  race.

“Aare is meant to defend the territory and the crowns of Yoruba kings.

“Your first job is to defend the crown, when you do that, the entire yoruba land is defended.

“You have been picked to restore the dignity of yoruba race. You are no more Gani Adams of OPC alone anymore, you are now Aare Ona Kakanfo of Yoruba land, its different.

“You must repackage the kingship stool ,you should be the solution to Yoruba problems”. the Oluwo submitted.

In his reaction, the Aare Ona kakanfo designate thanked the Obas for their support and show of love , even as he promised to do all within his capacity to live to the expectation of all.