THE Oyo State Commissioner for Education, Science and Technology, Professor Adeniyi Olowofela has emerged as one of the fifty most inspiring personalities in Nigeria according to The Guardian Newspaper.

Concerned about the get-rich-quick mentality of the youths of today, the organizer described the ex- council boss, Olowofela and others picked from various field of endeavours as inspirational persons whose stories and life trajectories can serve to motivate the youths to think positively , and galvanize them to dream and pursue goals in order to achieve, rather than just wasting away their potentials by engaging in criminal activities.

According to The Guardian Newspaper in a letter written to the Commissioner, dated January 31, 2018 titled “NIGERIA’S 50 MOST INSPIRING PERSONALITIES -SPECIAL REPORT’ and obtained by Mega Icon Magazine, said: “We write to intimate you that you have been picked as one of the 50 to be spotlighted in this momentum report which will be the first of its kind by any newspaper”.

While lamenting the alarming rate of criminal activities that have been giving Nigeria and Nigerians the wrong names everywhere as a result of the mindset of the youths, the management of the national daily, however described this as worrisome and repulsive, saying ” they need to be re-oriented “.

” Today in Nigeria, there is no hiding the fact that the youths are not interested in hard work or ready to struggle to achieve. All they want is money and they want it by hook or crook. They want to ride big cars, use luxury items, live in big houses and live comfortable lives without lifting a finger. This definitely is a complete antithesis to yesteryears when the youths then set their sights at certain goals in life and struggle through thick and thin to actualize these set goals. Then, it was usual for youths to work their way to the top in their various organizations and career.

“This is why The Guardian has come up with this initiative which is meant to make them see that there is virtue and valour in hard work by showcasing people who through hard work, resilience and can -do spirit got to great heights in this country”, the management informed.

Before nomination of the award, the Professor of geophysics, Olowofela who graduated from the University of Ibadan, (UI) has trained over 25,000 students, supervised over 50 B.Sc projects and more than 15 Ph.D projects, among whom have become Professors and Associate Professors. In the course of his academic career, he has more than 70 publications to his credit, two of them are being used by University students in Germany till today.

Also, he served different parties and governments in various capacities which include: National Delegate for National Republican Convention (NRC) in 1990; Member, Governing Council, Oyo State College of Education, Oyo between 2000 and 2003.

Similarly, he has served as Party Chairman, Alliance for Democracy (AD), Ido Local Government, Oyo State between 2002 and 2003 and as Chairmanship Aspirant, All Nigerian People’s Party, (ANPP) where he won the controversial election conducted by the then Oyo State Governor, Senator Rashidi Ladoja in 2007.

Thereafter, he was appointed by Governor Abiola Ajimobi as Transition Committee Chairman, Ido Local Government from 2011 to December, 2014 and Commissioner for Education Science and Technology from June 2016 till date.

The Commissioner had received several awards and honours; both locally and national, which include: overall Best Performed Local Government Chairman in Nigeria, 2012 at the 19th Edition of National Award for Excellence in Grassroots Leadership, Presented by Grassroots Leadership Centre, Abuja.

The Professor also bagged ‘Oyo State Commissioner of the year award’, at the 2017 Miss Oyo State Beauty Pageant, presented by Silverstone Communications and Prestigious Award of Ambassador of Ethics and Conscience with Induction into Hall of Fame, 2018 by Centre for Ethics and Self Value Orientation. 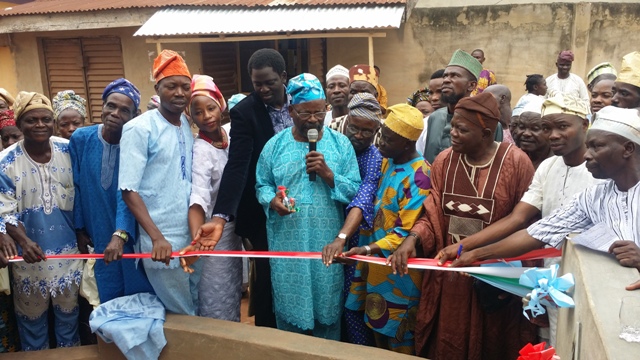 Jubilation in Ibadan as APC spokesperson donates boreholes to communities

Ibadan to have 32 obas as Olubadan remains paramount ruler

President Buhari is a Paragon of Servant Leadership, Says Ooni of...