The Ooni of Ife, Oba Enitan Adeyeye Ogunwusi (Ojaja 11), on Thursday at Chatham House United Kingdom (UK) said his late mother’s core values of responsibility really prepared him ahead for leadership roles as an individual and traditional ruler, saying African youths must imbibe the spirit of responsibility and commitment to positive ideals that can enable them to contribute meaningfully to the development of their society.

Ooni Ogunwusi who spoke at Chatham House, London in UK on “INCLUSIVE GOVERNANCE AND COMMUNITY ENGAGEMENT: THE ROLE OF TRADITIONAL LEADERS” recalled how a bungled errand given him by his late mother actually moulded him for leadership position in life.

According a statement released and signed by Comrade Moses Olafare,
Director, Media & Public Affairs,
Ooni Palace , the monarch said ‘ As a child, she would send me on an errands. She one day gave me her most valuable dress to iron. I plugged the iron and went to play to come back to fulfil what she told me to do not knowing the iron had become so hot that I got the dress burnt to the anger of my mother”.

“You will pay for this dearly, I will punish you well so you will know what you have done every day punished. That was a dress I was saving in case the King requested to meet me.

“That Phrase stuck into my brain. She had reserved a dress in case the King requested to meet her. This shows the recognition of Kingship]

The foremost African monarch admonished children obey their elders and parents. He equally charged parents to respect the traditional leaders in society in line with African culture and traditions.

The Co-Chairman of Nigerian Council of Traditional Rulers also stated the involvement of Traditional Institutions in governance for a better tomorrow.

“Traditional institutions based on my background is part of natures custodian of heritage and culture. We had ancient means of governance in the Kingdoms”.

“Before governance came into play traditional rulers were the first to smelt iron basis of civilization. The first to weave cotton started from the mother continent in Nigeria and the entire Yoruba race so many discoveries”

“Traditional leaders excelled in everything. We are today benefitting from. It was pioneered before the advent of modern day Government”.

“Traditional Rulers need to be properly included, blended with modern day government. This will make a significant change.

“A nation that wants to grow must uphold the heritage and tradition of that nation. If it is taken away there is no nation.

“We have lost touch with our root” heritage and tradition. Before the advent of colonialization we had kingdoms across Africa. Colonialists had to go through the traditional leaders”.

“Northern and southern protectorate were in 1914 merged to become Nigeria. This had to be done through traditional rulers and several African monarchs were either elected or appointed to serve in government”.

“At the Nigeria’s Independence, Former Ooni of Ife, Sir Adesoji Aderemi was the first Indigenous African Governor. The government across Africa couldn’t do anything without including the traditional leaders in decision making, administration and policy making. It is a beautiful system we have now”.

“It is natural till today that any politician that wants to get to into power must go through the traditional institutions. It’s about time for that to be properly synchronized and aligned”.

Ooni said Nigeria is at the forefront of leading Africa and urged the government to join hands with the traditional institutions to take that continent out of our current state, saying the continent is the fastest growing population with
70% as youths mainly between the age of 16 – 25, which is a strong human capital if properly utilized.

He added that Africans should go back to the root.

“Very important to rise-up to that occasion and know that at some point things were running well in Africa when the traditional rulers were at the forefront. Let us blend our tradition and culture in everything we do today”.

“Asia is still holding on to their heritage and culture. Africa is losing our culture and tradition. We need to know the key roles and involvement with tradition rulers in our day to day lives in Africa”

“Africa has have lost its roots. We lust learn to project the continent in a positive light”. 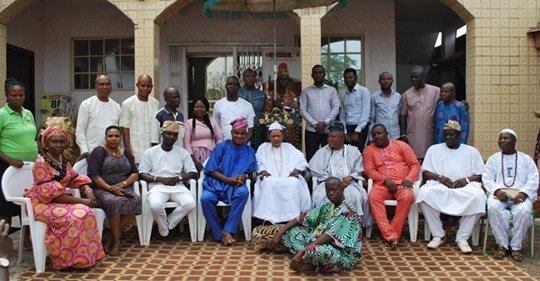 I Will Rely on God’s Directives, Guidance – Seyi Makinde