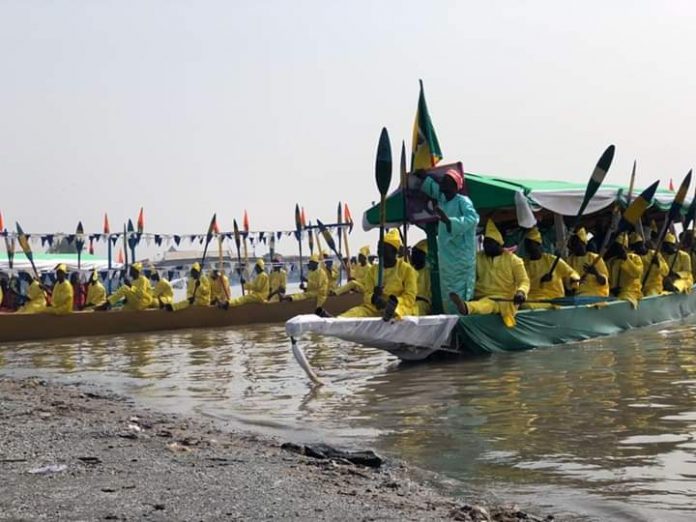 The Minister of Information and Culture, Alhaji Lai Mohammed, has lauded the Kebbi State Government for reviving the two-centuries-old Yauri Regatta Festival last year, after a four-decade hiatus.

The Minister stated this in Yauri, Kebbi State, on Saturday at the 2020 Annual Yauri Regatta and Cultural Festival.

“First, permit me to congratulate the government and people of Kebbi State in general and the people of the Emirate Council of Yauri in particular for sustaining this very rich cultural festival, the Yauri Regatta Festival, which dates back many decades. Thanks to the passion and commitment of His Excellency, Gov. Abubakar Atiku Bagudu, and the Emirate Council, this festival has continued to occupy a prominent place in the annals of festivals in Nigeria, attracting people from far and near.

“I am glad to know that after a hiatus of almost forty years, the festival has come back with a big bang,” he said.

Alhaji Mohammed said the magnificence of the Yauri Regatta Festival has earned it a pride of place in the Calendar of National Festivals, which is in the final stage of being published by the Federal Ministry of Information and Culture.

“The essence of this is for tourists, both domestic and international, to be aware so
they can plan their attendance ahead. I have no doubt that when the Calendar is finally unveiled, the Yauri Regatta Festival will occupy a pride of place in it,” he said.

The Minister restated the Federal Government’s determination to leverage on the country’s Creative Industry, which includes movies, theatre, music, fashion, festivals and tourism, to diversify the economy and provide jobs for millions of our our teeming youths.

He said the Creative Industry, which currently employs 1 million people, has the capacity to employ millions more if it is well packaged and marketed.

“I am therefore here today with a number of media organizations as part of the efforts to showcase the Yauri Regatta Festival to the world. We will not only showcase it in the traditional media, we will showcase it in the social media, which has no national boundaries. We will make sure that the world gets to know about the pomp and pageantry of the Yauri Regatta Festival,” Alhaji Mohammed said.

He said the Federal Ministry of Information and Culture has made it a policy to support the nation’s numerous festivals by not only attending them, but by also helping to raise their profile through massive publicity.

The Minister had earlier paid a courtesy visit to the Emir of Yauri, Dr. Muhammad Zayyanu Abdullahi, where he pledged the commitment of the government to preserve, promote and protect the nation’s cultural heritage.

High points of the festival, which was attended by the Governor of Kebbi State, Senator Atiku Badugu; the Speaker of the House of Representatives, Mr. Femi Gbajabiamila; the Senate Majority Leader, Senator Adamu Abdullahi and the traditional rulers in Kebbi State, include the Boat Regatta; canoe competition and swimming competition.

The Yauri Regatta started about two hundred years ago, when a flotilla of boats carrying warriors used to protect bridal trains from wild animals in the river as they (bridal trains) move from one island to another in the ancient Kingdom.

Buhari is a captured president – Fayose

Many Dead, Several Injured as Vehicle Rams into Market in Ekiti