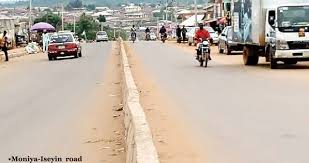 59
SHARES
1.4k
VIEWS
Share on FacebookShare on TwitterShare on WhatsApp

Moniya in Akinyele local government area of Oyo state is again in the news for wrong reasons, for quite some times now it has been cases of kidnapping and killing but yesterday  13 passengers were rescued by vigilante and police in abaedo a community close to Moniya

one of the female  passenger who claimed anonymity said’ We boarded the bus at Iwo road park and the destination was Ikotun in Lagos but after some minutes one of the passengers  said the driver was heading into another direction, the woman insisted that the driver should stop but he didn’t but when we reached aba edo around Moniya, he was asked to fix his door and he parked as he was about opening his door  the woman shouted and everybody alighted  from the vehicle and the vigilante and police later surface and take us to  the state

” It was God that save us, the man was adamant that he was on a right route when we told him , if not for the door he wanted to fix when he parked it would have been another story by now’ She concluded