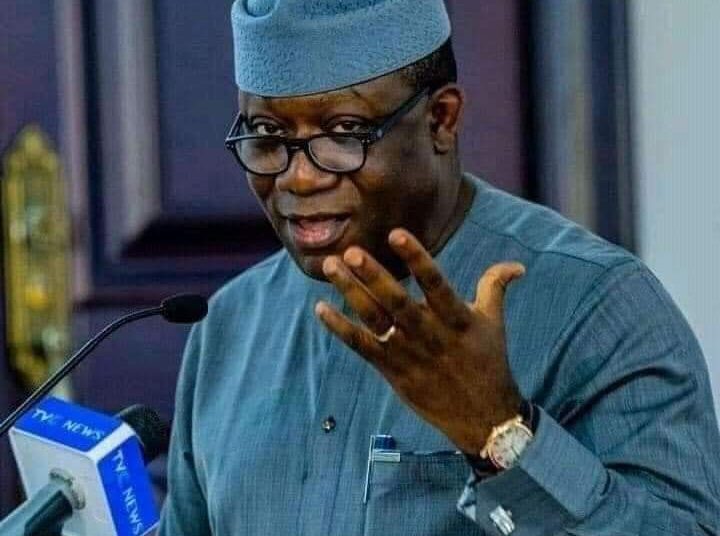 372
SHARES
5.1k
VIEWS
Share on FacebookShare on TwitterShare on WhatsApp

They are frustrated, they knew Fayemi has doubled their performance in just two years despite the meagre resources available to the state. Ask them what they did with the surpluses available to them. Fayemi meant so well for Ekiti people. He’s building new schools equipped with modern facilities. He’s building more road infrastructure across the state. He’s working very hard to open the state to investors. He’s telling everyone that Ekiti State will be great again. That’s his dream, and he’s working hard to achieve it.

What has they gotten to offer? What do they know about education when they themselves are dropped out? Just check their records, it’s a mix of “Agbero and Bole’kaja stuff. Their best trade is lies and they live large on it. In their characteristic manners, they fed our people with lies for good four years without adding any value to human existence. Now they want to mislead the good people of the state with “white” lies.

They are frustrated! They are looking for a leaking roof to occupy the land! They said Fayemi was owing WAEC! And not too long, we confronted them with evidence of full payment to WAEC. Immediately they saw it, they ran back to their holes with thick shit on their heads thinking of what to tell the people again.

Fayemi mi ooo, go ahead with your Omoluabi ethos, Olambiwon ninu Oko Erelu Olabisi.. Ekiti people now know better between a true friend of the people and a meteorite who called himself “Ore Mekunu” who specialises in eating “Otili” and “pakala.” Let’s tell them who you are? You are a man of great accomplishment. You are honourable, intelligent, committed and humanistic in character.

The good people of Ekiti are very proud of you. Not only that, you are recognised in the North, in the East, in the South and in the West. No wonder the Sultan of Sokoto, His Eminence Muhammadu Sa’ad Abubakar said about you: “He’s a son we are proud of in the North. He’s of course the adopted son of our leader and father, Sir Ahmadu Bello. He is going to be given all due love of a son of the soil because he is the adopted son of our father ”Sultan said. The Ooni of Ife also referred to you as the true son of Oduduwa. Another leading lights from the South South called you ..”a man of character and integrity that’s well respected across the country.” What else can we say about you!

Gov. Fayemi, indeed you are a man loved by the creator. Do you know what an aspect of the Hadith of the Prophet Mohammed ( S.W. S) said? “He who Allah loves, he blessed with a good wife.” You are indeed blessed with a very good wife and a fantastic ally. A wife to you, but a mother to all of us. Erelu is a helper to this generation. That’s why you have attained all these accomplishments. Erelu is a great ally and mentor. A great co-pilot in the journey of life. She is a formidable dependant created amongst the great philanthropists.

Ekiti people oooo, you now know better between those who lied to you and a man who meant every inch of his words. A man who wants good life for you and your children. Let’s make Ekiti State great again.

Adl is a Development Agent, he writes from Ado Ekiti