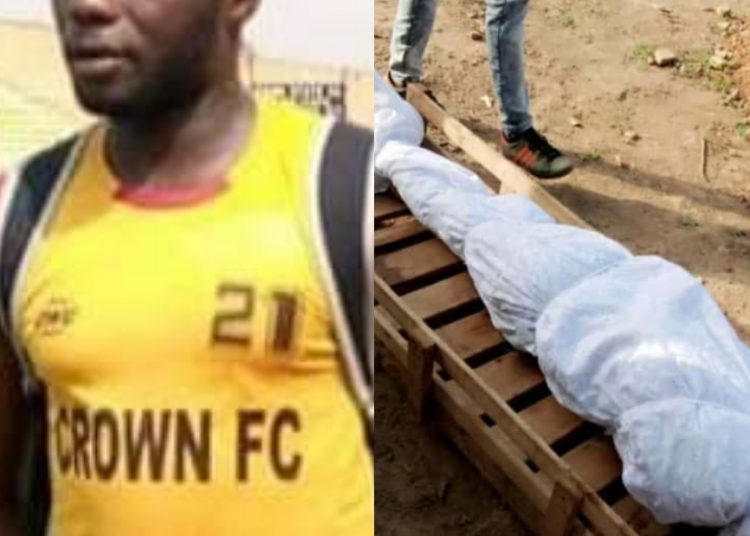 372
SHARES
4.7k
VIEWS
Share on FacebookShare on TwitterShare on WhatsApp

He was buried in Ibadan on monday

‘After he slumped during the match and their medics brought him back ,they ought to have taken him to hospital immediately for proper medical attention rather than returning him to the camp where he developed another crisis.

Lamenting the death of his friend, a footballer who did not want his name in print said it ia very unfortunate that the system being run in Nigeria football is not encouraging, we play and train under pressure, the managements feed fat on the players without any consideration for our well being

“imagine, the resume on thursday started training on friday and play on Sunday, what sort of things is that, majority of the guys are yet to be properly fit, they need one or two weeks training before they can be fit nack into the system but because every players want to protect his career, they a have no choice that to work under that unconducive condition.”

We have no choice because they do threaten with Sack, they do sack players in the middle of season, after the season, they dont care about us, no serious medical attention, after paying salaries they shared the remaining allocation from government every month, things should not continue like that, stakeholders must do something about it.

They described deceased was a skillful footballer whose future is very bright in his choosen carrier, We use to play football together every sunday, he is very accommodating and friendly, we were all praying for him to travel to Europe or other continent where his skill will be much more appreciated but death took him away without his dream coming to reality

Council Chairmen Clears Air on Why They Were Invited By ICPC