The Ekiti State Commissioner for Information, Tourism and Values Orientation, Aare Muyiwa Olumilua has said that the State Government would continue to develop tourism centres in the State to global standards, in order to access the potential economic and social benefits accruable from similar world class tourist centres.

Aare Olumilua gave the assurance while receiving the Olupole of Ipole-Iloro, Oba Babatola Oladele and the Olohan of Erijiyan, Oba Adegoroye Omosebi both from Ekiti West Local Government Area of the State, who paid a courtesy call to his office in Ado Ekiti.

The Commissioner listed some of the tourism sites in the State to include the Ikogosi Warm Spring, the Arinta waterfalls at Ipole-Iloro, the Ero Dam, Fajuyi Memorial Park, Olosunta and Orole hills in Ikere, the source of Osun river at Igede, Ewi’s palace in Ado Ekiti as well as Esa cave in Iyin Ekiti and Erin Ayonigba sacred fish river at Erijinyan Ekiti.

Stressing that tourism would not only boost economic activities in the State, Olumilua said that the present administration in the State would use tourism for employment generation, boost wide scale industry/ revenue, source for foreign exchange earnings, develop infrastructure and improve the brand image of the State.

He appealed to all stakeholders to support the efforts of government at improving their lot, stressing the need for traditional rulers, opinion leaders and youths in the State to properly guard the tourists’ sites in their areas against vandalism and other forms of misuse, in order to achieve utmost benefits from the natural endowment.

In his remarks, the Olupole of Ipole Iloro, Oba Babatola Oladele appealed to the State Government to expedite action to upgrade the Arinta Water falls, in order to boost revenue generation for the tourists’ attraction.

Oba Oladele also stressed the need to ensure that the site is manned by honest, well-mannered professionals, adding that considering the vast variety of people that visit the site including both local and foreign tourists, it is essential to have thoroughbred professionals handling the tourism site, in order to protect the integrity and the image of people in the State.

Also speaking, the Olohan of Erijiyan, Oba Adegoroye Omosebi lauded the efforts of the State Government to develop the State and improve the lot of the people.

Oba Omosebi who also called for urgent intervention in developing the Erin Ayonigba sacred fish river, pledged the continued support of his people towards ensuring the success of the Fayemi led administration. 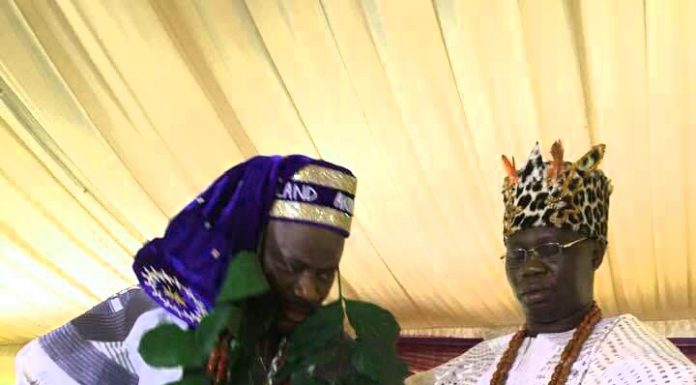