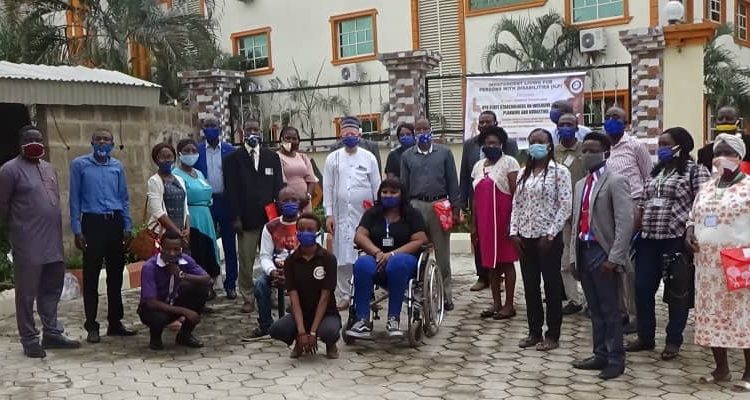 some of the participants at the event

83
SHARES
4.5k
VIEWS
Share on FacebookShare on TwitterShare on WhatsApp

Idowu, who was represented by the Programme Cordinator to oversee the implementation of the Unified Tertiary Matriculation Examination (UTME) for visually Impaired candidates from 2017 till date, Ibukun Olagbemiro, said this on Friday in Ibadan at the closing ceremony of a 3-days programme tagged “Oyo State Stakeholders On Inclusive Education Planning and Budgeting” where representatives from Ministry of Education, Oyo State Universal Basic Education Board, Women Affairs, Environment, Public Works and Transport, administrative personnel from Islamic and Oba Akinyele Model Schools were present.

The programme was organized by Independent Living for Persons with Disabilities (ILP) and funded by Disability Rights Fund (DRF) as part of a bigger project that has begun since 2018.

According to him he said the aim of the programme is to make Oyo State stakeholders plan and budget for inclusive education for persons with Disabilities saying persons with disabilities are excluded from general educational system.

He urged Oyo State governor, Engineer Seyi Makinde to fulfil his promise of establishing a Agency for persons with disabilities in the state.

“I liken the case of people with disabilities and their inclusiveness in the society to a case of slavery. People taken has slaves had no choice, no life and couldn’t become anything not because they didn’t want to but because some people taught their skin colour made them ineligible or unqualified.

“The same applies to people with disabilities. Different things of course lead to these disabilities. Some were by birth, some caused by accidents and many other factors.

“The truth is no one wants to be disabled and when this happens it is expected that one manages and the least the general public can do is to help them.

“Exclusive education that we are looking at is people that are usually excluded from the general educational system. We all know that their are schools for persons with disabilities.

“When you put people with disabilities in same school with persons without disabilities it will boast their development, morals and reduce stigma in the society.

“Even after schooling getting a job is always difficult because its believed they didn’t go through the normal schooling system and they won’t be productive like their able counterparts,” he said.

“Governor Seyi Makinde made a promise during his campaign to establish an Agency to look after the needs of persons with disabilities. It’s our duty has a civil society to put government on their toes.

“I understand he has many demands and things to do but this is also very important. If he sets up this Agency it will make Oyo state a model state that other states can follow and maybe the Federal Government too can tap into.”

“I know in 2019, president Muhammadu Buhari assented on the bill for People Living With Disability, time is going and the earlier the better because it’s a long journey.

“I implore the state government to hasten whatever plans they have to cater for the needs if people with disabilities,” he said.

ILP Project Officer, Oluwaseun Ojomo, said persons with disabilities have not been fully included in some of the policies initiated by the government.

Ojomo said there has been considerable progress in education enrolment over the last decade saying 263 million children remain out of school globally, and they are most likely to be girls, children from the poorest backgrounds, from ethnic, cultural or linguistic minority groups, living in conflict, and living with disabilities.

“National governments, supported by the international community, must develop strategies and commit resources to overcoming these challenges and ensure that SDG 4 targets, particularly those targets focused on equity and inclusion, are achieved.”

One of the beneficiaries, Kunle Oke, representatives from Oyo State Ministries of Women Affiars and Social Inclusion thanks the organiser for the initiative.