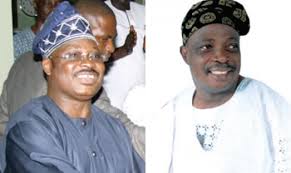 Accord party in Oyo state has urged the state government to attend to pressing issues such as prompt payment of workers’ salaries, pensioners arrears and address the lingering crisis rocking Ladoke Akintola University of Technology (LAUTECH), Ogbomoso .

Just as it took a swipe on the recent report of Judicial Commission of Inquiry set up by Governor Abiola Ajimobi of the state to review the Olubadan Chieftaincy declaration which recommended 32 beaded crown Obas in Ibadanland.

The party alleged that by coming out with such report, “The APC government in Oyo State is on the verge of destroying the valued traditional institution in Ibadanland.

Accord party in a statement issued by its Publicity Secretary, Engineer Akeem Olatunji  said “Oyo State as at today is owing salaries and pensions arrears while the State ranked 29th in the last WAEC results apart from the deplorable situations of the rural and urban roads couple with unprecedented poverty in the State due to capital flight occasioned by corruption and non patronage of local contractors.

“Furthermore, LAUTECH has been under lock and key with students remaining stagnant in their academic pursue since 2015 due to the APC led administration refusal to cater for the school needs and backlog of salaries being owe her staffs and lecturers.

It also alleged that Oyo and Ogbomoso were the next target of the Ajimobi-led administration to create room for an unpopular candidate in the 2019 general elections in the state.

“We have heard from various sources that Oyo and Ogbomoso traditional councils are the next target of the State government.

“The aims and objectives of the unpopular moves to jettison the fantastic Ibadan ascendancy structure is to create avenue for the unpopular APC administration in Oyo State to cause confusion ahead of 2019 poll.

“Since the ancient city started the monarchial system in 1820 with Baale Maye Okunade as the first king, the well-arranged traditional structure that is adjudged the best in the Southwest has been followed. This orderly arranged ascendancy to the throne of the Olubadan makes Ibadan unique in Yorubaland.

“The party, Accord wish to reiterate that African history are not written for fun, as it contained processes and procedures to be followed in our ways of life. Our traditions and culture cannot in any way be equated with modernity or globalisation.

“The party, Accord in Oyo State hereby challenge the state government to organise a town hall meeting, as regards the review of the Chieftaincy law before it embarks on an exercise in futility