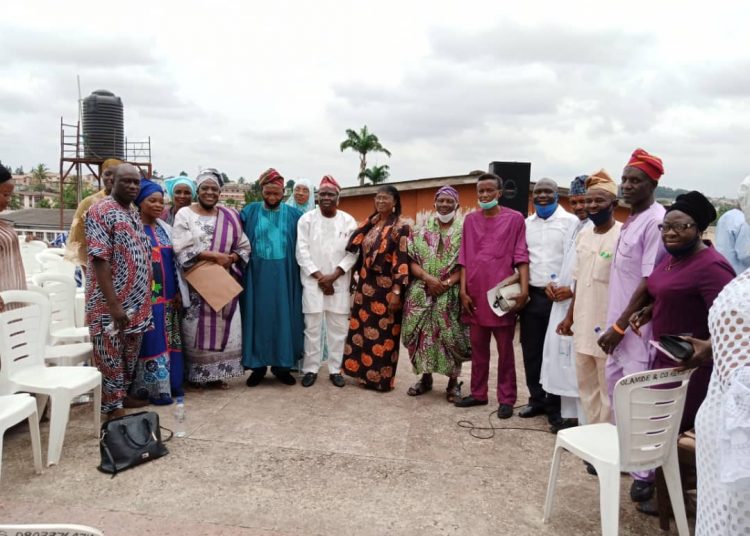 432
SHARES
1.3k
VIEWS
Share on FacebookShare on TwitterShare on WhatsApp

The Yoruba World Congress has on Tuesday reaffirmed her ‘unalloyed confidence’ in the leadership of their leader, Prof. Banji Akintoye adding that the organization is not in crisis.

The Yoruba group made this claim during a press conference organized to brief the nation about its current state celebrate the organization’s first year anniversary at her National Headquarter, Soun Ajagbagunde House, Bodija Ibadan.

The group which housed over 100 Yoruba organization in Nigeria and Diaspora claimed that the dissolution of executive council is a family issue which is been resolved within the clan.

They further stressed that the association remain unequivocally committed to the ideals of the Yoruba World Congress (YWC) as eloquently expressed by Prof. Banji Akintoye, which are to liberate the Yoruba race from the oppression and persecution which Nigeria represents, to establish a better, more promising future for our teeming youths and to ensure the peaceful achievement of the self-determination goals of the Yoruba nation.

Saluting the uncommon courage of Prof. Akintoye, the association further maintained that the admittance of the proposed Yoruba Nation into UNPO is a novel and commendable achievement within a year of establishment.

“We wish to salute his uncommon courage and uncompromising doggedness in translating the Yoruba Redemption agenda and vision into action within the context of the finest Omoluabi ethos and traditions.

“Further to the above, our admission into the Unrepresented Nations and Peoples Organisation (UNPO) within a year of our existence, is novel and commendable.

“The Oodua Nation project is on course. We appreciate the efforts of Prof. Banji Akintoye and other leaders in this respect.

“The protection of lives and properties of the Yoruba and other ethnic nationalities domiciled in the South west geo political zone is of paramount importance to YWC leadership.”

“The Water bill at the national assembly represents a background manoeuvre to bring back RUGA and further appropriate more of the resources of Yorubaland. It therefore stands totally rejected by the YWC.

“In equal effect, the CAMA bill cannot stand because it puts the control of one religious group under another. It represents the ruthless deployment of power by the Muslim North to further continue the Islamization and Fulanisation of Nigeria.”

The Coordinator for Woman Affairs and Welfare, Princess Ronke Akinlolu speaking to Newsmen after the conference noted that Prof. Akintoye is needed in the organization to help in mapping their direction with his elderly experience since the late leader, PA. Adesanya died. She added that Prof. Akintoye put his energy and resources towards achieving the goal of the association.

ALSO READ  HARMATTAN: Oyo Police Advise Residents To Desist From Act That Could Cause Fire Outbreak