The Kayode Fayemi Campaign Organisation has accused Governor Ayodele Fayose of insincerity in his claim that the candidate of the All Progressives Congress (APC), Dr Kayode Fayemi, plans to create cattle colonies across the state if he wins the July 14 poll.

A statement by the Director, Media and Publicity of the Kayode Fayemi Campaign Organisation, Wole Olujobi, explained that Fayose, who had last year signed a law creating cattle colonies across the state, has been mischievously exploiting herdsmen’s crisis across the nation to paint Fayemi as a backer of herdsmen in their deadly attacks that had claimed hundreds of lives.

“Fayose has been deceiving Ekiti people and indeed all Nigerians that Fayemi is a promoter of herdsmen’s activities and that he is ready to create cattle colonies as one of his principal programmes so that herdsmen can unleash terror on Ekiti people.

“By this misrepresentation, Ekiti people will be unwilling to vote for Fayemi whereas Fayose himself in his Executive Bill he signed into the law last year had approved the creation of cattle colonies across the state to solve herdsmen’s crisis.

“Unfortunately, Fayose is a dishonest politician who relies on lies and deceits to mischievously score political points.

“After Fayose signed the law establishing cattle colonies across the state, immediately he discovered that herdsmen crisis is a good point to nail Fayemi, he quickly lapsed into manipulating the alleged plan to create cattle colonies by the APC candidate to paint him black.

“We know that Fayose runs Ekiti State like a foreman at construction site; he never reads anything on paper, otherwise he would have read the state laws over and over to realise that he had signed Cattle Colony Creation Bill into law.

“Fayose is mischievously pretending to forget that last year, he signed a law to create cattle colonies across the state only to now turn around to use the same cattle colonies he had already created to paint an innocent man black for political advantage,” Olujobi explained.

The campaign spokesman adverted the attention of Nigerians, and Ekiti people in particular, to take the pains to read Ekiti State Cattle Colony Executive Bill as proposed by Fayose and as signed into law last year by the governor, which he had not repealed.

He accused Fayose of running a campaign of blackmail and lies instead of programme appeal to sell his candidate to voters.

“While Fayemi had visited all parts of the state pointing to the projects he executed in his first term, Fayose and his surrogate, Prof Olusola Eleka, cannot point to anything with which they can campaign to get the votes of Ekiti people after putting Ekiti State into N117b debts, 40,000 people losing their means of livelihood, old people denied of the social security stipends, students denied bursary and scholarship, high cost of health services, suffocating taxes, including taxing school children; bad roads, insecurity, lack of water and failure to pay workers for between six and 10 months while pensioners are unpaid for a year.

“Conversely, Fayemi provided all these regularly for four years and so Fayose now sees him as a threat who must be blackmailed through cattle colony controversy that Nigerians are opposed to, to ensure his failure at poll, even though Fayose himself had last year signed the law establishing cattle colonies across the state,” he explained. 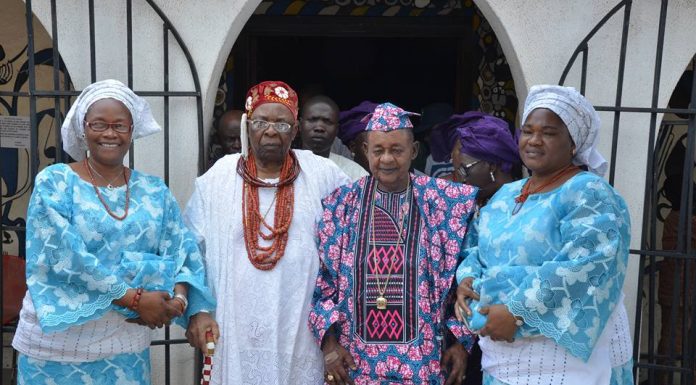 Olubadan Leads Ibadan Oba’s to Event Without Their Crowns