Why We Diverted Port Harcout Customer’s Goods To Oyo- Suspects 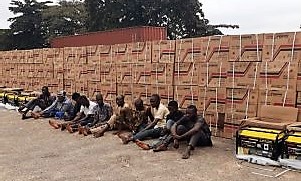 28
SHARES
322
VIEWS
Share on FacebookShare on TwitterShare on WhatsApp

The Oyo State Police Command on Monday Paraded 29 set of individuals who indulge in criminal activities which remarkably includes the arrest of 10 suspected criminals who specialized in hijacking and diverting company goods.

The Oyo State Commissioner of Police, CP Shina Olukolu who made this known to newsmen while parading suspected criminal at the Police State Headquarter, Eleyele, Ibadan further disclosed that these Suspects were caught with 410 Pieces of NEW Sumec Power generator, a Toyota Camry and 560 gallons of 4 litres Conoil Engine Oil recovers.

Olukolu added that the suspected criminal were arrested in their hideout at Olufemi area in Oyo Town by officers of the Special Anti-Robbery Squad (SARS)operatives at about 11:00am on the 22nd of August, 2019 and they have confessed to the crime.

While hearing from the suspect, The driver of the Mac Truck used as a means of conveyance to divert the goods, Abiodun Sarafa, 32, confessed that the truck was moved from sagamu has had been planned to drop the loaded goods to Port Harcourt.

“We are suppose to move from sagamu to Port Harcourt, but we diverted the goods to Oyo, I decided to use ibadan to get rid of thieves.

I decided to sell them to some people who promised to give me 1 Million for a start and will give me more when they value the goods.

ALSO READ  Police to deploy over 5000 officers for Akeredolu's innuaguration

Our game is over when they’ve arrested us and this is my first operation.”

Also speaking to Newsmen, the Woman who harbour the goods for the criminals, Wasilat Taiwo, who claimed to be a petty trader said claimed he is ignorant of the goods in the first place.

” They said they want to drop Vegetable Oil in my house till they see buyer, they promise to give me 1Million naira to boost my business.

But I decided not to queried them since they’re my area brothers, and I’ve never do this kind of job before. She said.

Other ciminal activities  bothers around Stealing, Rape, Kidnapping, House Burgling, and other vices.

The Commissioner confidently said, that the command had been able to make a remarkably achievement with the help of Journalist, and credible information been gathered from the public as an agent of community policing.

He added that the only vehicles reported by the masses to have been stolen during the Ileya festive Period at the Prayer Ground have been recovered.

In another development, the commissioner advised members of the publics to do against putting law into their hands, as immediate Jungle Justice is not recognized by the law of the country.

He further appealed that anybody caught of suspicious act or criminal offences should be refer and handed over to the police adding that the Nigerian Police will not condone anyone who indulge in such act and will make them face the wrath of the law.