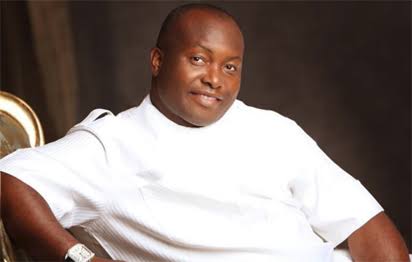 Elected under the Young Progressives Party (YPP) on February 23, Mr Ubah is one of the 11 senators-elect who were with Mr Lawan at an interactive session with journalists in Abuja.

Mr Ubah told journalists that Mr Lawan is a good man with the best experience in the Senate, hence his decision to pitch tent with him.

“Lawan is a very good man, and has the best experience, I believe in the Senate. For me it is a free world, it is democracy.

“So, I am free, and I am pinching (pitching) tent with him because I believe he is the kind of leader we need in the 9th Senate,’’ Ubah said.

Asked why he is associating with a member of the APC widely seen as an unwanted party in the South East, Mr Ubah said he could not be an island in the Senate.

“It is a choice anybody has to make. I can’t be alone in the Senate. If any group comes up and wants to lead the Senate, it is a duty for me to look at them and see if I can pinch (pitch) tent with them

I Did my Beat as Vice President to Obasanjo – Atiku