says no rift with K1 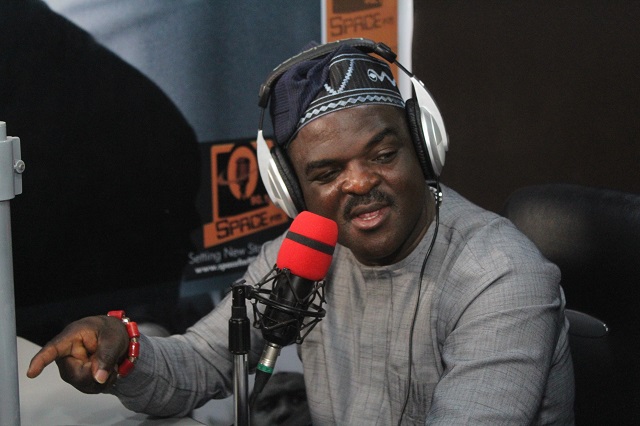 143
SHARES
3.4k
VIEWS
Share on FacebookShare on TwitterShare on WhatsApp

The paramount king of music and the Bobagunwa of Yoruba land, Alhaji Abass Akande Obesere, has debunked the rumors making the rounds that he is presently at war with King Wasiu Ayinde Marshall, K1, saying that both of them enjoy cordial relationship as far as ‘I am concerned’.

He also revealed that his stage name, Obesere, was the nickname given to Adeleke Adesanya, one of his band boys, who always got angry whenever people referred to him as such.

Alhaji Obesere, otherwise called “Omo Rapala” by his admirers, gave this indication while featuring on a radio magazine program, Parrot Xtra Hour on Radio, anchored by Olayinka Agboola on Space FM 90.1 in Ibadan on Tuesday.

The Fuji exponent who started with Marvin Giwa Music Record Label and had also featured on the defunct Sony Music among several others came into limelight with songs which many would regard as taboo said that he is always proud to identify himself as an indigene of Ibadan Oyo State capital.

“I’m so proud to be an Ibadan indigene. I can never hide this from anybody. Our people are courageous people. We are not cowards. If you see anybody who claims that he is from Ibadan and is timid, that person must be a mixture. Whatever we say, we always stand by it. We always say it as it is. So, when the person we spoke about comes back to himself, the next thing is that we will ask him why he behaved the way he did initially.

Speaking on the controversy that surrounded his becoming the Bobagunwa of Ibadan land, Obesere narrated that somebody gave him a letter to the Olubadan of Ibadan in order for him to be installed as such but along the line he was told to go to KWAM1 and that if the latter agreed, he would be installed.

ALSO READ  Education: A Pathway to Exit The Dubious Record of Being The World Headquarters For Extreme Poverty

He, however, declined to do so, according to him, because he believed he could stand by his own reputation and his achievements and could not depend on anyone, more so, that King Wasiu Ayinde Marshall was not even from Ibadan.

“The Olubadan is my father. I have a cordial relationship with him. I pray that he stays long on the throne of his fathers. Kabiyesi is my father. I got a letter to be made a chief. The Olubadan’s Palace said I should go to King Wasiu Ayinde Marshall and that if he consents to it, I would be installed. I said I could not. He was not even from Ibadan.

“So, I was happy when I was installed as the Bobagunwa of Yoruba land. It is not about Ibadan alone. It is about the whole of Yoruba land. I have a cordial relationship with the Olubadan of Ibadan land. No one dares look him in the face. I can’t do so too.

“I don’t have any issue with KWAM1. He is the Mayegun of Yoruba land. It is good, everyone must believe his own is the best. One must emulate good things. It is good for everyone to get what he deserves. No one is even above mistake that is why an Alfa will tell you to listen to God’s injunction rather than find fault with an Alfa”.

Obesere said that like his newly released album titled “Standout”, everyone must strive to standout in whatever one is doing and that God used the stage name, Obesere, as the light to bring him success.

“I can say a little about the origin of the name Obesere. It is the name of one of my band boys who handled the beaded calabash (Sekere) His name is Adeleke Adesanya. We grew up together at Ebute Metta.

“People called him Obesere whenever they see him. This used to make him angry. When he was on stage, he would signal that he would deal with them later. He was popular than me. When I saw that that he rejected this name, I took it up and everything changed for the better.

“With the Obesere sobriquet, some people later said I was using the name to ridicle women- but I hate people abusing women because my mother was also a woman. So, I dropped the name for a while, but when my band boys who went to East Ebute Meta said that another person claimed that he was the original Obesere, I had to take up the name again”.

Asked about why he is no longer singing only lewd songs, Alhaji Abbas’s who also has Diplomacy, Oodua, OBTK, Mr. Teacher, Overthrow, Oba Idan among others to his credit said that as a professional, adding that one must be able to adapt to every situation and audience.

“Asakasa is God’s gift. I did not have any mentor. I came from Agbo Ile Jalaruru which is renowned for its production of many musicians. Music is in my blood, so, I have no mentor. Nobody taught me”.

He said that on the recent increase in the pump price of petrol and electricity tariff, he maintained that both musicians, actors and actresses in Nigeria have not been silent.

“We have been talking about the increment. Only God can intervene. You can’t fight on God’s behalf. We should face God alone. Not politicians. Even in America and Europe, they have also passed through many challenges before coming this far. I believe God would raise up somebody for us.

As to whether he has any plans to bid for political positions via the ballot box in the future, he said that music is his only priority for now but that his wife is interested, adding that “if God calls me in the future, well I don’t know”.

Obesere who is called Papa Tosibe and Sido Phobia by his numerous fans averred that he has never had any embarrassing moment, saying, “people love me everywhere I go. Everywhere, they respect me. I run away from what can cause me embarrassment. I always arrive at show venues on time.
He then used the opportunity to talk about his latest effort which he calls “Standout”.

His words “it is selling like hot cake. You must stand out and stand right in whatever you do. I always use my natural talent. No drinking of alcohol, drugs or anything of that sort.