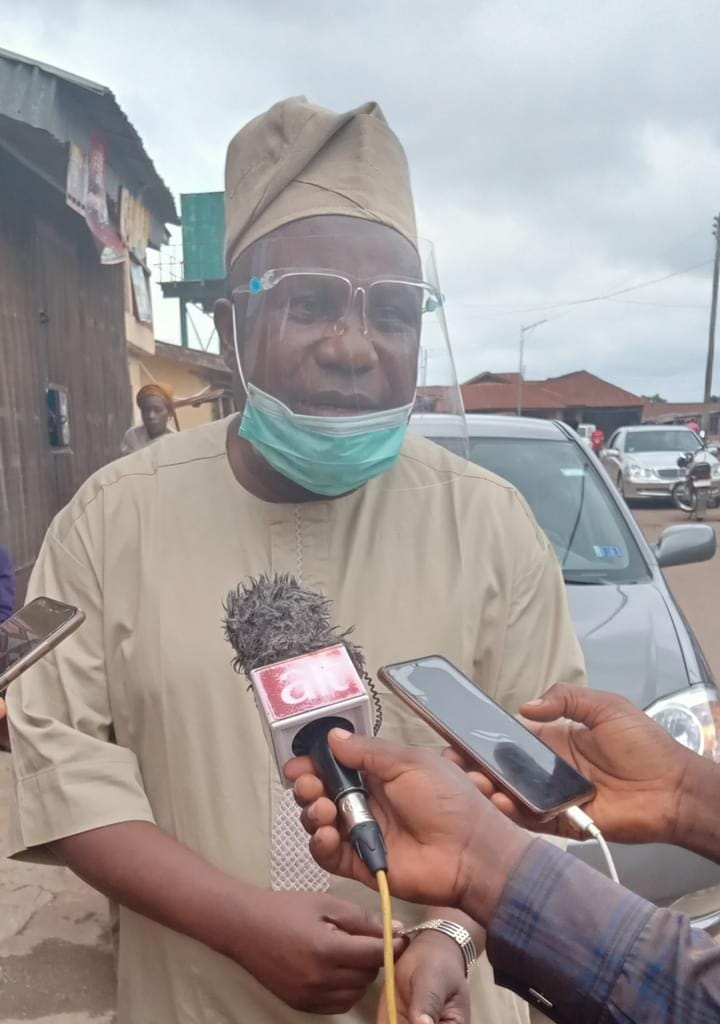 Senator Abdulfatai Buhari, lawmaker representing Oyo North Senatorial district is an All Progressives Congress APC chieftain in the state and Chairman Senate Committee on Land Transport. in this short interview with Remi Oladoye he spoke on the effects of COVID-19 and on the crisis rocking APC

The usual fanfare associated with Sallah is missing this year due to COVID-19 pandemic and for us  as  nation we have a lot to learn , what  do you have to say on this  sir

Barka dey sallah to Nigerians , this is an unusual sallah for us, imagine today in my house I try to control people because I am a lawmaker I should be a law breaker, yesterday I was watching Aljazera I now saw the people performing the Arafat, they were less than 1000, in a place were we usually have over 7million people every year, there is hardly any year that I don’t go to Saudi Arabia twice or thrice in a year but this yea I have not been to there once due to corona virus  so this is unusual  celebration but we thank God for life, we thank God for his mercy  but as far as I am concern, it is the mercy of God that is sustaining us now but the truth of the matter is that we have to Obey the law, we have to love ourselves,  COVID-19 is real and it is the truth, the country who are even advanced that toy with it are suffering for it today for example when it started Trump the American president was referring to it as China virus  today it has become a general issue  so that is why the Sallah celebration is very low everywhere  including Ogbomoso

As the chairman Senate committee on Land Transport,  can you tell us the update  on the ongoing railway projects in Nigeria ?

Well by now we  would have commission Lagos Ibadan rail, we are supposed to do it in April but unfortunately we couldn’t do it  in April because of Corona virus, the president was supposed to commission it  Lagos –Ibadan rail which we have test drive during December when we are moving people from Lagos to Ibadan and vice versa, after which we want to commission it in April and launch Ibadan – Kano and Port Harcout to Maiduguri, the eastern rail line but because of the situation we are unable to do that  the ministry  are planning a new date  hopefully between September and October we may likely commission Lagos-Ibadan and launch the other ones I mentioned above, we are starting it well because the Abuja –Kaduna rail line have been very fantastic and it has solved a lot of problem  and by the time  we commission that of Lagos – Ibadan a lot of things would happen , it would ease  traffic and reduce decongestion on Lagos –Ibadan road and that will make the road strong and safer  for the people , even most of the goods that would be carry by heavy truck or trailer will be transported by the train and there is also a passenger train.

Your message for Nigerians

We are passing through a very difficult situation not only for Nigerians  but the world is passing thru difficult situation because COVID-19 has affected a lot of things  including the economy  and health sector however I am appealing to Nigerians that lets use the opportunity of COVID -19  advantage, there are certain things we are able to learn from COVID -19 for example, we belief that some basic things arguably that  we normally do that we don’t do again   most of our unhygienic life but with COVID-19 education and the way WHO are  warning us it has been minimized but the most important thing has been exposed  is that our health sector is very porous, we need to concentrate  on our health sector, the rich, the poor, everybody is at home now, we are managing what we have at home now, the facilities is not even good enough to serve us  as a nation let alone assisting other people  so the lesson is  for people that are leading us in Abuja to know that governance is not for the masses alone its for all of us , I pray we are able to learn from it and improve on our health sector and plan other things  and reduce medical tourism abroad so that going abroad will just be for  leisure and not for medical treatment  if we have the facilities here , I was watching CNN some days ago  and  I saw a Nigerian lady addressing a press conference  as a medical Doctor  she was talking  professionally look all the people behind her are white  which implies that we have a very good human capacity all we need to do is to develop  infrastructure and provide basic amenities by the time we  do that we will be there God willing if people are sincere and ready to work for the Nation.

Shortly after the death of Senator Abiola Ajimobi, it was gathered that some  faction in APC were claiming the leadership  of the party which further deepens the crisis in the party how true is this and what is the way out

You are wrong, because there is nothing like crisis because of the death of Ajimobi, before the death of Ajimobi there were crisis even before the election and he set up a reconciliation committee which they’ve started and hit the ground running, his death has created a lot of vacuum no doubt about that but its not a problem that is not solvable,  we will be able to handle our situation . Speculation, opinion interest is bond to arise, even if  Ajimobi was alive , every other person scheming for themselves so there is no crisis,  and if you say crisis at the National level, the board of trustees have been able to handle that by dissolving the team and  setting up a caretaker committee which is already  working   in Oyo state we are talking to ourselves, the reconciliation team are working we belief by the time  the finish their job  the sky will be our limit

Satisfaction is not the issue now, are they working yes they are working, and there is no way when you set up a reconciliation committee, your own side of divide will determine your confidence and belief in the committee but the result will determine whether they have achieved or we are winning or they have achieved but I am appealing to all the members of APC including those who have grudge to bury the hatchet and lets form a good  team , there is no way that you can satisfy everybody , it is not possible but the most important thing is the majority, they should understand that the more the merrier, the  better we are stronger  to fight the way and if we divide we will fall, I belief  by the time they finish their reconciliation in the nooks and crannies of Oyo state everybody  will be happy and the most important thing in reconciliation is sincerity the moment people sees the essence is genuine and not bias they will belief you and follow ready to return.