From time immemorial, our society and the world at large must battle a menace that make many people see mirage and start propagating it to the society. One of our challenges today is how Social Media has really amplified the spread of fake and unfounded news.

The news of Federal Polythecnic, Ayede in Ogbomoso has been in the news(Social Media) since Monday and character assassination, malign of personality and name-calling of Distinguished Senator AbdulFatai Buhari has been the order of the day since then. But the question many fail to ask is what is his offence in all this?

To cast our memory back a bit, Oyo State is one of the few states with no Federal Polytechnic in the country, with this in mind, Oyo North Senatorial District produced Four Senators: Senators Brimoh Yusuf from Ogbomoso (1999-2003), Robert Koleoso from Saki (2003-2007), Gbenga Babalola from Iseyin (2007-2011) and Hosea Agboola Halleluya from Igbojaiye in Itesiwaju (2011-2015).

In 2011, National Assembly was inaugurated with Senator Hosea Agboola (Oyo North), Senator Ayoade Adeseun (Oyo Central) and Senator Femi Lanlehin(Oyo South).Along the line, Senator Adeseun explored the vacuum of the absence of Federal Polytechnic in Oyo State and swung into action while our own Senator from Oyo North who was a Principal Officer(Deputy Chief Whip) couldn’t even lift a finger like his predecessors.

After all the legislative fireworks, the bill for the establishment of Federal Polytechnic in Oyo passed the third reading and sent to the Executive. In his own calculation as the sponsor of such August bill, he had put the location within his Senatorial District. But unfortunately, he didn’t win his reelection back to the Senate in 2015 but he had accomplished the task with the passage of the bill. It must be noted that Legislative Arm doesn’t and can’t establish Higher Institutions but can only give legal backing to such. It is prerogative functions of the Executive.

Towards the twilight of 8th Assembly, the news roared its ugly head again and Senator BAF was accused of relocating the Federal Polytechnic to Ogbomoso. We offered convincing and superior arguments on it throughout the electioneering campaign, and when the promoters realized we stated the facts, they chickened out.

Since the reelection of Senator BAF in 2019 elections, it has been one day one fake news about his activities. Accused of been instrumental to the sitting of Military / Naval Secondary School in Saki, to the relocation of Collation Centre from Iseyin back to Ogbomoso, it has been fake news upon fake news, lies upon lies. The most disturbing trend is that some people have been mischievous and couldn’t forget their election loss in a jiffy. To those ones, you have almost 4 years to wail.

Distinguished Senator BAF’s offence is that Oke-Ogun had bad representation from 2003-2015 which was not fault of his. His offence also include his place of birth as if his predecessors from Oke-Ogun were not supported by Ogbomoso people. Another is his unprecedented achievements that has eclipsed those before him and lastly, resounding victory in 2019 elections against Oke-Ogun ‘sons and daughters’

As people didn’t pay attention to Senator’s Adeseun gigantic effort to site Federal Polytechnic in his Senatorial District back then until it came to fruition, people are not paying attention to Distinguished Senator Buhari AbdulFatai’s unrelenting efforts in making sure the Bill for the establishment of Federal University of Agriculture,Oke-Ogun get passed in the Senate. This he has promised to accomplish. May Allah help him, Amin.

ALSO READ  Black Panther: A good film with many lessons for Nigeria By Atiku Abubakar

To those children of hate, perdition, forlorn, pettiness and psychopath,stop spreading tantrum and bunkum. But if you insisted, we shall continue to lay out the facts to those who are not beclouded by hate and detest. Let’s support Distinguished Senator BAF in actualising his promises during the campaign, among is the passage of a Bill establishing Federal University of Agriculture, Oke-Ogun.
May Senator Abdul Fatai Buhari Oyo North succeed.
Abiodun Amuda (2A) 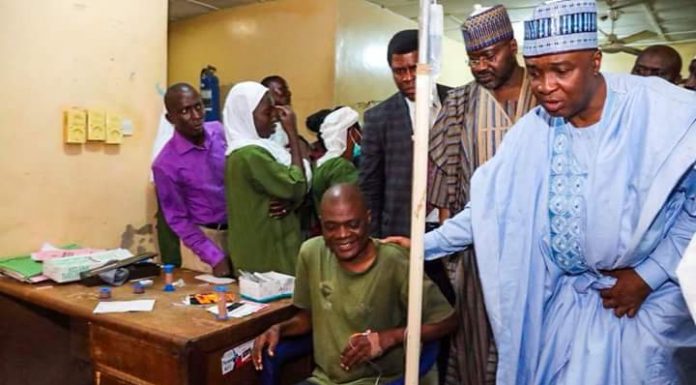 Saraki Commiserates With Victims of Gas Explosion in Nasarawa