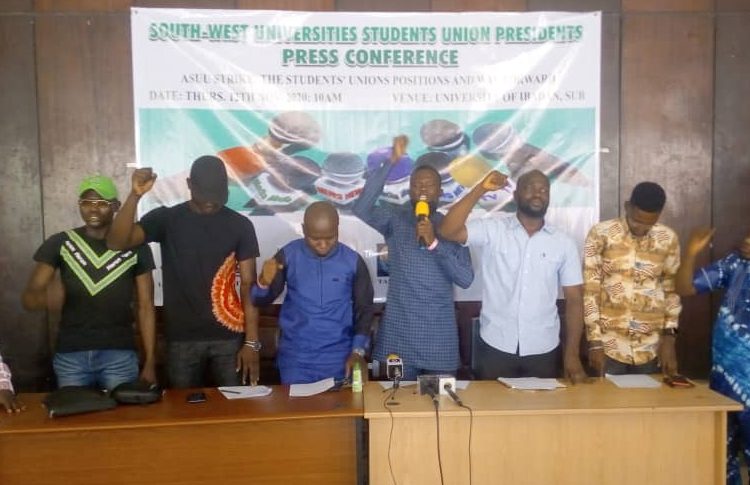 537
SHARES
5.7k
VIEWS
Share on FacebookShare on TwitterShare on WhatsApp

This was disclosed today at the press conference organised by the South-West Universities Students Presidents helf SUB events centre, University Of Ibadan.

The press conference  was organized in response to  the ongoing strike that was has been on since Monday, March 23rd 2020.

While speaking, the host president, Akeju Oluwasegun fussed on how the industrial actions have been the norm from time to time, as Nigerian Students can no longer enjoy quality education and conveniently acquire certificate within its stipulated years, thus, there’s a need for action.

The President for Federal University of Agriculture, Abeokuta, Oloyede Abiodun Micheal requested for an end to the ongoing action by the academic staff union of universities.

He expressed that the struggle should never be sapped and that solutions should be sought immediately, in his words he said “the struggle of ASUU should never be undermined as we all truly know, revitalization of payment and improvement in the quality of infrastructures and regulations of payment of salaries is direly needed, inspire of this we urgently call for a compromise to be reached by both parties”

ALSO READ  We Are Tired of Failed Promises from FG- ASUU

He called also called the Federal Government to see need for prioritising the educational sector as key to sustainable growth and development. He lamented on the needs do students welfarism to be rated “top priority” in the Nation’s to do list can no longer be ignored.

He therefore urged the federal government to look deeply into their demands, forming a Committee, comprising all students Union Leaders across the federation, and representative of the government.

Vehemently in his statement, the Students’ Union body gave the federal government the ultimatum of seven days to resolve the crisis and get the students back to school, else there would be an aggressive agitations thereafter.