Successive Nigerian leaders have continued to show the limits in their delivery capabilities. This is because; as the electorate we never showed interest or is it that the ‘cabals’ prevented us from searching for excellence, nurturing excellence and reaping excellent delivery. Rather than presenting a person who can deliver, political-economic and religious cabals present only those they think can win elections and sustain their hegemonic state rape as against those who have ability to deliver the goods.

After winning elections, the ill-prepared winner struggles in vain to show he has the ability to transmute from what he has (ability to win elections) to what he does not have (knowledge of things and art of governance). Consequently, such a person continues to take inferior decisions which have negative consequences on our collective livelihoods.

The reality of today is that Nigerians have made costly mistakes in their past electoral decisions by not going against the ‘packaged lies’ of political merchants. Depending on whether you like the present or you belong to the ‘change the CHANGE’ assembly, there is need to review the past, query the present in order to take a better decision as we elect a President and other public office holders in 2019.

I present in this piece a model of leadership characterisation as espoused by foremost political scientist Professor Adigun Agbaje. The Faculty of the Social Sciences, University of Ibadan had slated Professor Agbaje to share his life experiences with the Faculty; the program is designed as a training, warning, cautioning and mentoring platform to colleagues who are presently occupying or aspiring to leadership positions or are facing challenges navigating doing scholarship in the most excruciating conditions bequeathed by government to Nigerian intellectuals. As a microcosm of the Nigerian society, the university represents all that is present in the larger society. Agbaje who had been Deputy Vice Chancellor (Academic) and former Dean, Faculty of The Social Sciences  combined international scholarship to foreground the essentials of a good leader which I now adapt for deciding our electoral decisions on Nigeria beyond 2019.

The 2019 President of Nigeria must be one who can lay the foundation of excellence, coherence of thoughts and logic. But since something cannot be built on nothing except it crumbles, the electorates must prioritize excellence. Our failure to ensure that our best are presented for the exalted position has been why the labours of our heroes past appear to have been in vain. To compete in the World cup, a nation needs to present her best 23 players and unleash the best 11 each time there is a match play. Why should we then elect misfits to man public offices? Nigeria needs a coherent government whose actors do not brandish contradictory figures and statements which most times are lacking in logic.

We do not need what Professor Agbaje calls ‘accidental adventurer’ in Aso Rock or a sympathiser. While an adventurer is ill-prepared like most occupiers of political offices a sympathiser most often lacks solution to the problems facing the grieving public. To show they have nothing to offer, they appeal to God to punish what the constitution has empowered them to do against those they claim to have evidence against. This is why an accidental adventurer is slow to act and mostly would take decisions that will misdirect the nation since he/she does not know the true state of things.

While we have played down on academic qualifications of our leaders, their antecedent in this respect is vital. While you may not know all before getting to office, a leader must be ready to go through the books and educate himself or herself with what went on before assuming office. This will guide what he/she will say and not dancing round in circles. With sufficient familiarity with probe reports, a President is able to know that $6billion plus was expended in a regime on power and not $16billion from the person who ought to know.

We do not need a ‘Kabiyesi’ (nobody can question me) character as President, governor or head of government agencies. A person who finds it condescending to speak to the people on issues affecting their life chances must be allow near public offices. Power derives strength from consensus and holders of public offices must learn not to act like emperors that generate conflicts and crumble the empire.

Nigeria needs those loyal to the country and not to Mr President or Governors. According to Professor Agbaje, ‘loyalty is about telling your boss to do the right things. Loyalty is about resigning. Loyalty is to the extent of being valuable’. In Nigerian politics, loyalty is about ensuring your successor is from your inner caucus so as not to expose your ‘over-eating’ habits while in office; it is about staying put in office even when you are being rubbished as a Minister. Loyalty is refusing to obey court orders against dictates of the constitution. Loyalty is being allowed to go free when prima facie of complicity is established against you. In 2019, Nigeria needs a person who will ensure equality before the law and show loyalty to the country and not one that will ethnicize governance or allow the unabated weakening of institutions.

Opinion moulders and celebrated propagandists have started playing up factors which will not contribute to the development of a better and functional Nigerian ecosystem but that which continues to provide a safety-valve for the band of parasitic elites. But a Nigeria President beyond 2019 must be someone who will not continue the tradition of building strong people as we see today but strong functional institutions. We need a President who can separate private troubles from public issues.

Nigerians should elect solution providers and not rumour merchants. Any person who cannot provide world class health facility for Nigerians; fund public education of the masses; ensure protection of lives and properties is not worth being voted for. The electorates must elevate their demands from aspirants and move away from taking food and money that provide monetary relieve only to suffer for forty-eight months!. The shooting of Nollywood films such as riding on Molue bus, eating beside the road; or eating Booli and Epa should reveal deceitful strategies of elitism. Those who begin emergency intervention services months to election are not fit to rule for they have allowed people to suffer for years without blinking an eye. While Professor Agbaje’s characterisation is an ideal type of leadership traits needed to advance the management of human and material resources, however, they are not exhaustive. A lesson from the Faculty of the Social Sciences Staff Life experience talk is that those in leadership positions must be answerable to their people. But the making of those in offices rest squarely with the electorate and this is why 2019 elections must produce a set of prepared leaders and not those on internship voyage. Adventurers must not be elected to rule us as they will trash us into ‘the other room’ where we do not have the right to ask questions and demand for our rights.

Dr Tade, a sociologist sent in this piece via dotad2003@yahoo.com 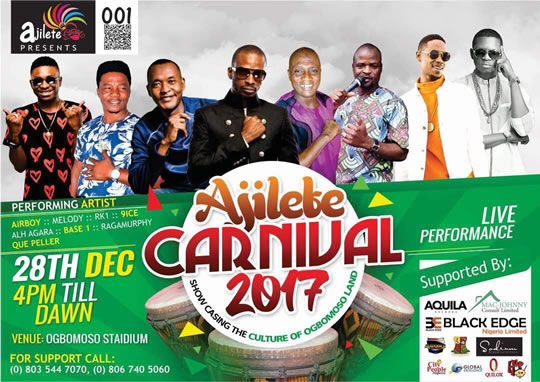 Open letter to Sons and Daughters of Oke Ogun. By Lukman...

Contemporary issues on yoruba nation and their antecedent security implications :...