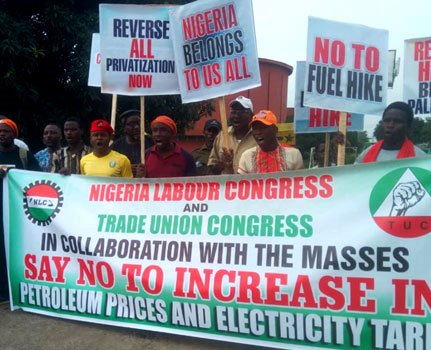 21
SHARES
2.4k
VIEWS
Share on FacebookShare on TwitterShare on WhatsApp

Labour leaders and members of the civil society in Edo State have said that  the recent action of the National leadership of the organized  labour to suspend its planned nationwide strike the proposed  protest weakens the labour movement in Nigeria.

Edo labour leaders also rejected the decision of the national leadership of the organised labour to suspend its planned nationwide strike.

According to the displeased labour members, the decision to suspend the planned strike action was taken by the national leaders at the last minute without consulting members and key stakeholders across the country.

They told Channels Television that the recent action of the national labour leadership weakens the labour movement in Nigeria.

They lamented that the action of the labour leadership belittles there efforts, as well.

The Organized Labour and Civil Society groups, therefore, reject suspension of strike by the national leadership of Labour.

They demanded to revert to the old fuel and electricity prices and immediate fixing of the nation’s refineries.