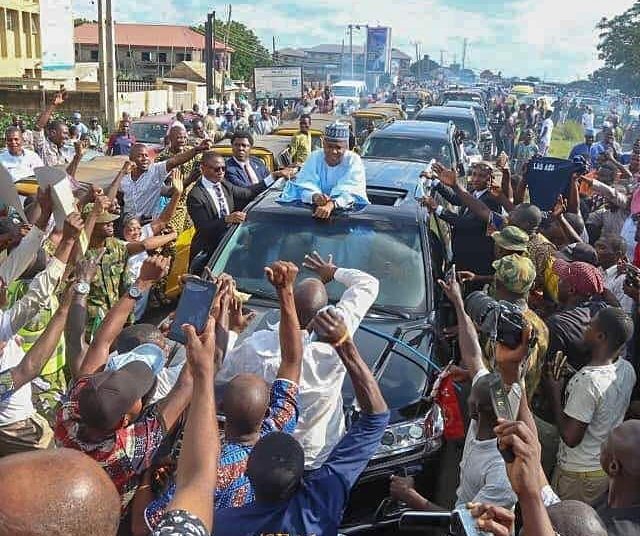 In Nigeria today, we are in a defining moment when many Nigerians have melancholy etched on their faces like status symbol . Just as when the stars are covered by swift corus and the sky is darkened by storm clouds, the vision for a greater country is covered with the pervasive gloom and doom. Most people have fallen in hard times and despondency seems to be the order of the day. At times like this, people need a leader to shore up their confidence and fillip their hope for a better future. The only true joy, says Boethius is self-possession in the face of adversity. Our energy is sapped out and the never say die spirit in us is fast ebbing out. Underlying all these is a government that promised hope but it’s rather dashing hopes. It’s indeed a sultry weather for most Nigerians, who for no fault of theirs are defrocked and defrozen. Indeed, What people are earnestly yearning for is an especial person to move them from the ennui of their desolate moment, if only by assuring them that all hope is not lost. And that was what made Saraki’s declaration message a soft balm.

It bears emphasis that Saraki’s message of hope for Nigeria ‘s teeming youths came during this eerie period best captured by Frederick Douglass as “when justice is denied, where poverty is enforced, where ignorance prevails and one class is made to feel that society is an organized conspiracy to oppress, rob and degrade”. A time when neither person or property is safe.

Like an heaven -sent comforter, the Senate President, Oloye Bukola Saraki, known for doing his things in a novel way appeared like Boethius , the author of “Consolation of philosophy “whose philosophy is laced with consolatory messages. Beyond that consolation our own SP message was heartwarming and soothing. It was also timeous and both the venue and the audience were selected square and trig. Senator Bukola Saraki choose a best time and place to formally unveil his mind to join the 2019 presidential race in a grand style.

Not that other people have not declared intention to run for president before him,it’s message that reminded people of their sad situation is something that people have heard not infrequently enough to desenticize their minds from its horrors.
But Saraki’s message came like “unheard melodies”. His target audience were group of youths and young aspirants under the aegis of “not too young to rule”. His message was fresh like a new day.

The youths who are accustomed to the leaders mawkish glamouring of their failure and with knack for shifting blame of their inefficiency on the “lazy youths” readjusted their seat when they heard Saraki reminding them what they only once heard ad a song – “The heroes lie in you”.

Saraki said ” I believe the Nigerian youths are critical to rebuilding and growing the economy and natural pride ” . With pinpoint accuracy, he dwelled on the systemic rot and policy wonk that have combined to tardy the pace of our nation’s progess. He spoke on the seaming side of our states like ravaging poverty, the sharp division in our class, ethnic and religion. He bemoaned our economy – going south, condemned high rate of unemployment and other ills. But before the audience turned pale, he looked at their direction and assured them that hope is not lost. “You are a determined generation, ready to power a Nigerian renaissance…, you’re indeed the future of the country.

What a novel presidential declaration. Senator Bukola Saraki is truly a genuine article. A must read for any youth with the will to succeed. That’s a president Nigeria deserves.