Hope of fulfillment of his dream to become a medical doctor may be dashed, if nobody cares about Salam Akinjide.

At six, Salami, a nursery two pupil of D-Way  Group of School, Ologuneru is brilliant, meticulous and intelligent.

He was diagnosed to have a hole in his heart, hence urgent surgery is required to save his life. He is expected to have the surgery and treatment at Obafemi Awolowo teaching hospital, Ile-Ife, Osun State.

The cost of the treatment, surgery and drugs are estimated to be N5million.
He father Ismail Akinjide, a shop attendant and his mother, Oluwatosin Akinjide, a stylist are struggling to put food on their table for survival, let alone affording medical bills.

His mother, Oluwatosin who spoke with our correspondent was on her kneel while profusely crying for held from Nigerians.

She said; “please don’t allow my baby to die. Help me with whatever you can afford. I don’t want him dead” he said.

A diagnostic report obtained by our correspondent at the University College Hospital (UCH) and signed by Dr. B.E  Adebayo, a Consultant Paediatric Cardiologist indicates that Salami had one episode of fainting about a year before his presentation at the hospital.

According to the report, Salami is currently on oral propranolol to control his symptoms.

The report reads; “Abdulsalam was first seen in the Paediatric Cardiologist clinic on the 28th of January, 2020, when he presented with easy fatiguability and recurrent squatting of a year’s duration.

He also had one episode of fainting about a year before presentation. Pregnancy history was uneventful with no history of exposure to any known teratogenic agent.

“Physical examination at presentation revealed weight of 16kg and no cyanosis nor digital clubbing, and oxygen saturation was 91-92% in room air. He was not dyspnoeic with a respiratory rate of 28 breath/minute. He had normal volume pulses, regular with no radiofemoral delay. Heart rate was 88 beats per minute, the first heart sound was normal while the second heart sound revealed soft P2 with a grade 4/6 pansystolic murmur loudest at the left upper sternal border.

“Chest radiograph showed cardiomegaly with reduced lung markings. Electrocardiograhy showed features of right ventricular hypertrophy and echocardiography confirmed the diagnosis of tetralogy of fallout. He however will required open-heart surgery for the correction of his congenital heart defect. This will help optimise his growth and allow him achieve his full potentials for development.” 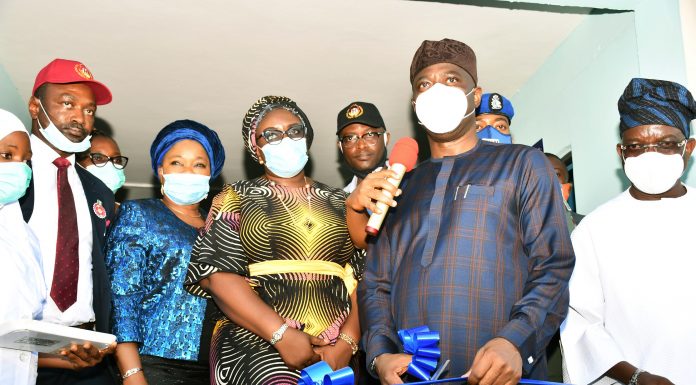 Makinde flags off Youths in Agribusiness Project in Aawe

PPC Wants Cancellation Of Results In 8 Federal Constituencies in Oyo Over Omission Of...