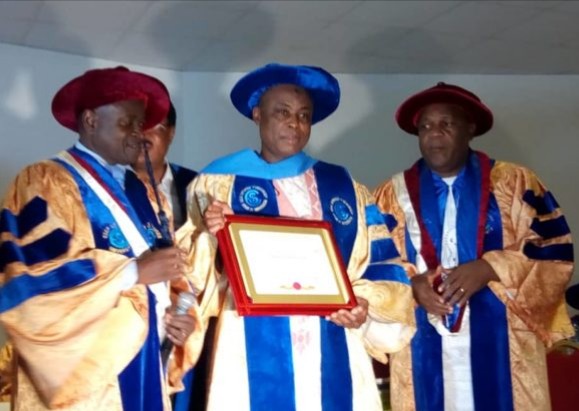 The Vice President, Nigerians in Diaspora Organisation (NIDO), who doubles as the Sarkin Hausawa of Cotonou, Alhaji Muhammadu Mouniru Garba Nakura, has bagged an honorary Doctorate Degree of Esep-Le Berger University, Cotonou, Republic of Benin.
The honorary Doctorate award was conferred on him inside the St.
Charbel Hall of the University on the occasion of the 2017/2018 Convocation Ceremony of the institution held recently, during which a total of 281 students bagged various degrees.
The occasion which marked the first time ever any University in Benin. Republic was awarding honorary Doctorate degree on any Hausa personality from Nigeria was graced by the Beninoise Minister of Education, Mrs. Marie Odile Attanasso, who represented the President,Republic of Benin, Patrice G. Talon as well as notable Hausa leaders from Ghana, Togo, Niger and Benin Republic.
In his address at the Convocation ceremony, the Founder and Chairman,Governing Council of the University, Professor Germain Ganlonon disclosed that the honorary Doctorate degree was conferred on Alhaji Garba Nakura in recognition of his age-long humanitarian and philanthropic gestures, especially to fellow Nigerians in the Republic  of Benin.
Specifically, the authorities of Esep-Le Berger University, Cotonou had taken special notice of Alhaji Garba Nakura’s selfless service, particularly in the provision of Scholarship and Bursary to several indigent students from Nigeria, studying in various higher institutions in Benin Republic, Professor Ganlonon remarked.
No fewer than 50,000 Nigerian indigent students are reportedly benefitting, in one way or the other, from Alhaji Garba Nakura’s benevolence across Benin Republic presently.
Speaking further, Professor Ganlonon recalled with delight Alhaji Garba Nakura’s patriotism to the host country, having built private elementary schools as well as a model market in Cotonou where over 1,000 Nigerian traders were resettled.  He enjoined people of goodwill to emulate the good gestures of this Nigerian entrepreneur and philanthropist of note.
Responding, Alhaji Garba Nakura could not hide his joy for the honour done him by the authorities of Esep-Le Berger University, Cotonou saying he saw the Doctorate award as a stimulant to do even more in the service to humanity.
Alhaji Garba Nakura who is also the Peace Ambassador in Africa urged Nigerians in Diaspora to remain patriotic and be their brothers keepers while also supporting their host countries, thus boosting the existing bilateral relationship between the nations.
He particularly enjoined Nigerian students in Benin Republic and other parts of the world to eschew negative acts and remain good ambassadors of their fatherland.
ALSO READ  Erio Bridge Collapse: Ekiti Government Creates Alternative Routes
Tags: CotonouEsep-Le Berger UniversityGarba NakuraRepublic of Benin

Rotimi Ajanaku at War with Hon. Saheed Fijabi Over Mandate