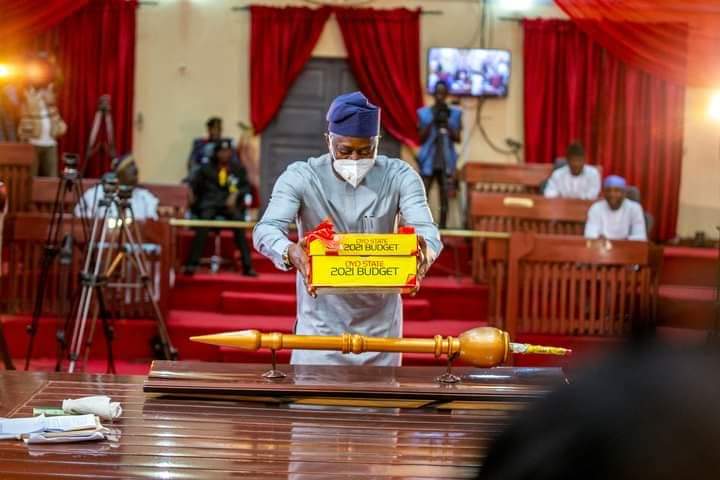 2021 BUDGET SPEECH DELIVERED BY HIS EXCELLENCY, SEYI MAKINDE, THE EXECUTIVE GOVERNOR OF OYO STATE, AT THE OYO STATE HOUSE OF ASSEMBLY ON MONDAY, NOVEMBER, 23, 2020

Back in September 2020, when we made the budgeting process public, we started off with the first stakeholder townhall meeting. At that meeting, I made it clear that this year, we are making the process more inclusive. So, unlike last year, when we held meetings at three locations, this year, meetings were held at each of the seven geopolitical zones.

The contributions of the stakeholders at those town hall meetings determined some of the contents of this 2021 budget, which I have chosen to tag, a Budget of Continued Consolidation.

Before I begin my presentation, I would like to say a big thank you to Mr Speaker, Right Honourable Adebo Ogundoyin and all Honourable Members of this 9th Assembly. The successes that we have recorded so far are due to your continuous support of our fiscal policies. This has led to an impactful implementation of the various elements that drive our plans- the Roadmap for Accelerated Development in Oyo State 2019-2023.

In the past year, we have made significant progress in the actualisation of our plans for Oyo State. We have been able to lower our infrastructural deficit, make improvements in healthcare delivery, improve the quality of education and achieve milestones in our security systems. Once again, thank you for your cooperation.

We remained bullish in our approach to developing Oyo State. Let me share one of our biggest wins in the last year. You will recall that in my 2020 budget presentation, I had stated that from January 2020, we will be recording a monthly Internally Generated Revenue (IGR) of three billion Naira. I am happy to report to you that despite the effects of the COVID-19 pandemic on the economy, we were just less than two hundred million Naira shy of our target monthly. As at September 2020, we had recorded an IGR of 25.6 billion Naira. And using the half-year figures, that represented a 26.4% increase in IGR year on year.

Oyo State’s IGR is presently about 32% of actual aggregate revenue. We still have not achieved a total dependence on the state income outside of federal allocation to fund the budget. Slowly, but surely, we are getting there.

For the 2021 Budget, our plan is to increase our annual IGR to one hundred and two billion, eight hundred and twenty-four million, two hundred and seven thousand, two hundred and thirteen Naira forty-six Kobo. (102,824,207,213.46.) We hope to achieve this by widening the tax net to bring in more taxpayers into the system.

Permit me to share some of our other wins from the 2020 fiscal year. You may recall, Mr Speaker Sir, that one of the issues I highlighted that has been facing our state’s budget is underperformance. By the end of quarter one, (Q1) 2019 budget performance was 38%. We were determined to increase this and had set a mark of 70% performance. Honourable Members of the House, although we have not yet met up with our target, our budget performance as at now is above average at 50.32%. We accomplished this despite the economic shock induced by the pandemic.

ALSO READ  Okere of Saki Calls for Intense Prayer For Gov. Makinde, Other Victims of COVID-19

Let me quickly state that our use of the Alternative Project Funding Approach (APFA), the Contractor’s Project Financing Scheme, as well as targeted loans, have a gone a long way to helping us to improve our budget performance.

At this point, I would like to crave your indulgence, Mr Speaker Sir, and Honourable Members of the House. Permit me to refer to our 2020 budget presentation. I would like to do a comparative analysis of 2020 and 2021 plans while taking into cognisance our achievements so far.

As promised, we prioritised the completion of ongoing infrastructure projects. For example, the 65km Moniya-Ijaiye-Iseyin Road, which was awarded at the time of our budget presentation last year, is already at 65% completion.

We have also approved and started reconstructing the 21 km Airport- Ajia-New Ife Express Road with a spur to Amuloko through the Alternative Project Funding Model on Design-Build and Finance basis.

Also, the now-famous Idi Ape-Basorun-Akobo- Odogbo Barracks Road, which was mismanaged by the previous contractor, has been re-awarded, and the new contractors have mobilised to the site.

We have also awarded the 44.7km Saki-Ogbooro-Igboho Road and work will commence shortly.

Additionally, we embarked on the remodelling of the Lekan Salami Sports Complex, Adamasingba, Ibadan. The project is ongoing. We are building four bus terminals at Iwo Road, New Ife Road, Challenge and Ojoo in Ibadan. We are also developing a bike and bus terminal at Agodi Gate, Ibadan. The Akesan Market razed down by an inferno in January 2020, is being rebuilt.
But we still need to undertake many more projects.

On education, let me report that we are the verge of completing the recruitment of 5,000 teachers for our state-owned secondary schools. We are gradually strengthening our education system. As of June 2020, we had started two hundred and thirty-six projects in this sector, some of which are ongoing. These projects include the construction of schools and classrooms, construction of Early Child Development centres, renovation of schools, installation of boreholes, the supply of furniture and sports equipment and other procurements. We also procured textbooks in core subject areas for the pupils and students in our primary and secondary schools. This budget year, we plan to do even more. We still need more teaching and non-teaching staff as well as the building and equipping of more schools.

Mr Speaker Sir, Honourable Members of the House, just three days ago the National Universities Commission announced the Memorandum of Understanding regarding the ownership of the Ladoke Akintola University of Technology (LAUTECH), Ogbomoso which we signed with the Osun State Government. As at now, LAUTECH is wholly owned by the Oyo State Government.

Our administration is all about boosting the economy driven by agribusiness. In the last year, we have not shied away from entering into partnerships, both local and international, that will bring about the needed development in Oyo State.

We initiated a bilateral agreement with the International Institute of Tropical Agriculture (IITA), Ibadan on the Start Them Early Programme (STEP) in agribusiness for the benefit of our youth and development of the agricultural sector.

To underscore the importance of Agriculture to our economy, the sector received an allocation of the sum of nine billion, five hundred and seventy-five million, forty-nine thousand, nine hundred and twenty-three Naira, fourteen Kobo (N9,575,049,923.14), which is 3.6 % of the total budget.

Distinguished Members of the House, the provision of qualitative healthcare services constitutes a major priority of this administration. Towards ensuring improved access to high quality and affordable healthcare services to the people, especially among vulnerable groups, we conducted a Free Health Mission across the state and procured medical equipment and drugs for the mission. We also procured ambulances, CT-SCAN with Transport Incubator and other vital medical equipment for state-owned hospitals.

We turned the COVID-19 pandemic into an instrument of development. As a result, we now have the Infectious Disease Centre in Olodo, as well as the upgraded Saki Specialist Hospital. We also upgraded the facilities at Agbami Chest Center and three Primary Healthcare Centres. In addition, we plan to upgrade one Primary Healthcare Centre in each of the 351 wards in Oyo State. This process is ongoing. To continue facilitating the good work we are doing in this sector, we are proposing a budgetary allocation of thirteen billion, two hundred and ninety-two million, five hundred and twenty-five thousand, four hundred and twenty-nine Naira twenty-eight Kobo (N13, 292,525,429.28) which represents 4.9% of the total budget.

On security, last year, we promised to procure new firefighting trucks, ambulances, and communication equipment to enhance the safety of residents of our state.

Mr Speaker Sir, Honourable Members of the House, I am happy to report that we have done all these and more.

ALSO READ  After consultations, Atiku Declares for President on Saturday

The Fire Service has been upgraded from a department to an agency and we procured four firefighting trucks for the Agency. We also procured patrol vehicles for the security operatives. We expanded the Security Control Room and City Watch facilities at the Oyo State Security Trust Fund Headquarters, Onireke.

Just last week, the Oyo State Security Network code named Amotekun became operational in Oyo State. And I firmly believe that very soon, we will begin to feel their impact.

Mr Speaker Sir, Distinguished Members of the Oyo State House of Assembly, please permit me, at this point, to present to you the Oyo State 2021 Budget Proposal. The total budgeted sum is Two Hundred and Sixty-Six Billion, Six Hundred and Forty-Four Million, Two Hundred and Seventy-Three Thousand, Three Hundred and Five Naira, Four kobo (₦266,644,273,305.0). This sum represents a 53.16% increase over the 2020 revised budget. Let me emphasise that the tenets of the Federation’s Fiscal Sustainability Plan (FSP) and other development aspirations were used as a guide in the preparation of the 2021 Budget.

Mr Speaker Sir, I must also mention that we have been able to resolve some of the issues around moribund industries in Oyo State. As you are aware, these have been a source of worry to members of this assembly and indeed the entire people of Oyo State. We have been able to put back in business state enterprises that have been laying waste for decades. Among these moribund industries are the Pacesetter Quarry and Asphalt Plant, Ijaiye; the Pacesetter Fruit Processing Plant in Oko; and the Agbowo Shopping Complex in Ibadan.

It will also please you to know that we have commenced the preparation of the Twenty-Year Oyo State Development Plan (2021-2040). Oyo State has never had such an overarching blueprint. The plan, when completed, will facilitate a speedy socio-economic development with the Medium-Term Sector Strategy and Medium-Term Expenditure Framework.

It has, once again, been my honour to present this budget proposal to you, Mr Speaker Sir and Distinguished Honourable Members of the House. It is my prayer that you give our proposal the usual consideration in a timely manner so that implementation may commence and Oyo State will continue on the path to accelerated development.
God bless the Federal Republic of Nigeria.
God bless Oyo State.