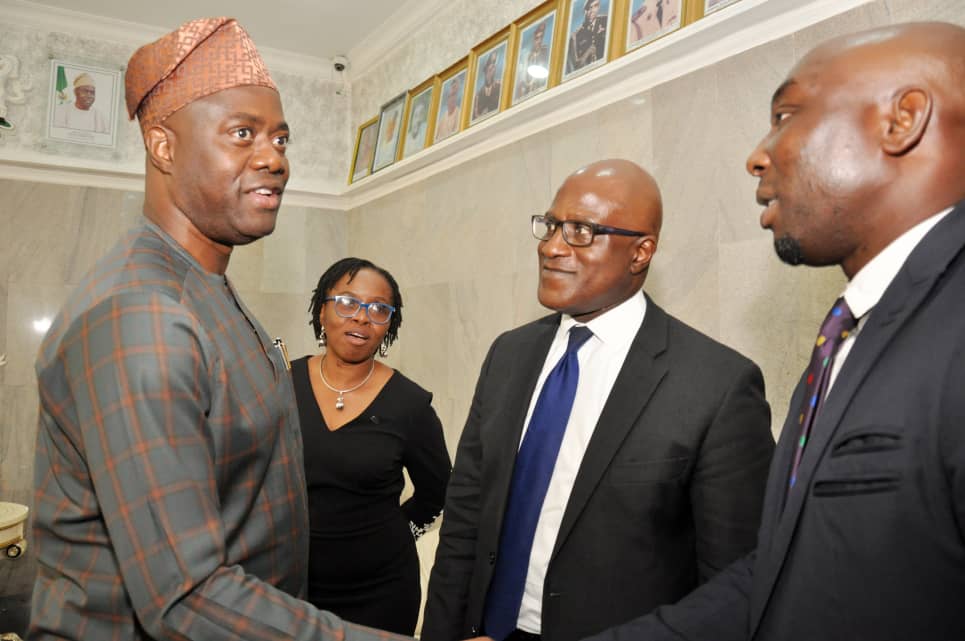 Oyo State Governor, Engineer Seyi Makinde, has pledged that his administration’s watchword will remain openness and transparency throughit his tenure.

Governor Makinde, who stated this while receiving a delegation of the First City Monument Bank (FCMB) led by Mrs. Bukola Smith, who paid him a courtesy call in his Office, Secretariat, Ibadan said that Oyo State was open to business that breeds development.

A statement signed by the Chief Press Secretary to the Governor, Mr. Taiwo Adisa, quoted the Governor as saying that he would conduct the business of governance in the state in an open and transparent manner in order to bring the desired development to the State.

The Governor said: “Oyo State is open for business and we try to take a different trajectory from what we have been used to in the past. What we are doing is very simple. It’s just to be open and transparent; these are our watchwords.

“We want to conduct government business in an open and transparent manner.”

He added that his administration was ready to partner with any organisation whose proposal would bring value to the Government and the people of the state.

Governor Makinde assured the FCMB team that his government would give equal opportunities to all banks, urging the team to be comfortable in making their proposition.

He hinted further that the working proposal submitted by the team would be studied and acted on accordingly, saying: “You don’t have to lobby anybody if what you have in your proposal is good and is able to bring value to the Government and people of Oyo State. Of course, we will be open and discuss it with you. If we have issues that we are not clear about, we will put them on the table.

“So, you should really be comfortable dealing with us, because we will definitely give you equal opportunity with other banks. We don’t have any preference for any bank. We are value-driven. If there is value on the table, we will deal with.”

The Governor appreciated the support received from the FCMB during the just-concluded retreat organised for the top functionaries and political appointees in the state held at the International Institute of Tropical Agriculture (IITA).

“I want to thank you for the support you showed to us during the retreat at IITA. We appreciate the support and your bank. You have supported us and it won’t be out of place if we give you support from our side, so we can get into a win-win situation,” Makinde said.

Earlier, the leader of the team, Mrs Bukola Smiths, who is also the Executive Director of FCMB, said the visit was to intimate the governor with the products of the bank.

Smiths noted that the visit was also to rejoice with the governor on his victory at the Election Petitions Tribunal, adding that the bank recognised achievements recorded so far by the new administration.

She said the bank was ready to partner with Governor Makinde and see how to help to make him achieve his administration’s objectives in areas such as health, education, security and industry.

“FCMB has great skills in those areas and we will like to bring these skills here to help you achieve your various objectives,” she said.