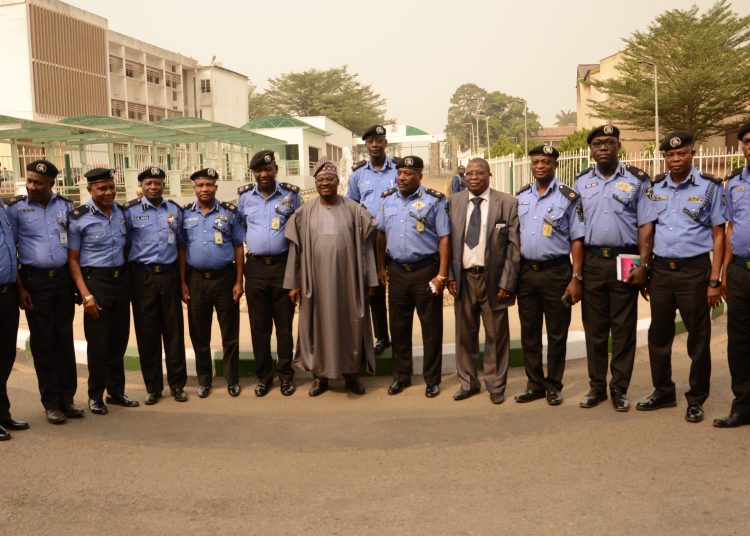 Oyo State Governor, Senator Abiola Ajimobi (7th right); and Commissioner of Police at the State Command, Mr. Abiodun Odude (6th left), and other senior officers and new area commanders from the command during a visit to the the Governor's Office, Ibadan... on Thursday. Photo: Governor's Office

The Commissioner of Police, Oyo State Command, Mr. Abiodun Odude, has adjudged the state as one of the most peaceful states in the country, just as the Governor, Senator Abiola Ajimobi, declared that the Ibadan, the state capital, was no longer a ‘garrison command.’

He said this when he led the top echelon of the state command on a visit to the Governor’s Office, Ibadan, on Thursday, to inform him about the creation of three additional police commands in the state.

A former National Chairman of the Peoples Democratic Party, Dr. Ahmadu Ali, had in 2006 (an era notorious for political turmoil and brigandage) referred to Ibadan as a ‘garrison command’ and named a late stalwart of the party, Chief Lamidi Adedibu, the ‘garrison commander.’

Odude, who commended the governor for his administration’s continuous support for the state command, said that the gesture had assisted the police in maintaining peace, law and order, as well as in taming the band of motor park overlords that had made life hellish for residents until 2011.

He expressed the appreciation of the police to the governor and other stakeholders, whose combined efforts and cooperation, he said, had made policing less cumbersome across the state.

The CP said, “Oyo State is one of the most peaceful states in Nigeria today; and this is not achieved overnight. I can easily say it was achieved through continuous support given by the present administration in the state under Governor Abiola Ajimobi.

“The administration is sparing no expense in providing logistics supports and all other things needed to get the job done and today we are the best for it. The people are happy for the reign of peace, which has culminated into good business environment for investors.

“We are also using this opportunity to thank other stakeholders, whose combined support and cooperation has brought relative peace to Oyo State. This peaceful atmosphere has enhanced social life and the economy of the state.”

Odude informed the governor that the Federal Government had approved the establishment of three new Area Commands in the state to complement the existing ones.

He listed the new commands as Saki, which he said would be headed by an Assistant Commissioner of Police, Mr. Abubakar Baba; Eruwa, under the supervision of ACP Sola Oketunji; and Iganna, which will be under the leadership of ACP Dayo Ariyo.

Ajimobi commended the gallantry of the officers and men of the state police command in ridding the state of criminalities, stressing that the reigning peace in the state was the bulwark behind his administration’s major achievements.

The governor rued the pervading paucity of fund, which he blamed for the inability of the government to assist the police and other security formations more than he was presently doing in his drive for a near zero crime rate in the state.

He said, “We should be more grateful to the police authority in Oyo State, because through them we were able to transform the state from one that was notorious for violence in the past, which earned us the tag of a ‘garrison command’ to a very peaceful state that we are today.

“All our achievements in the areas of commerce, education, culture and tourism, urban renewal as well as provision of standard health services are attributable to good and well-secured environment made possible by our collaboration with the police.

“We would have been able to do more towards empowering the police but for the paucity of fund experienced lately. But, we promise to do all we can to maintain peace and make Oyo State the darling of business interests from Nigeria and from abroad.”