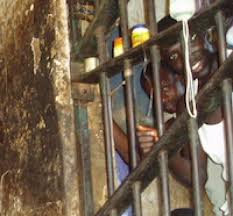 The Chief Judge of Oyo State, Honourable Justice Muntar Abimbola, on Tuesday released 30 inmates from the Agodi Prisons, Ibadan.Out of the figure, 25 inmates were released unconditionally and on the grounds that they were discovered to have stayed longer than expected in custody through their trial process, three were released on bail to continue their trials, one was released on legal advice from the Directorate of Public Prosecution (DPP) and another one, a juvenile was released to be taken to remand home.Only two of the released inmates were female.The release according to the CJ was in exercise of his powers to visit the prison to see how proceedings and trial of inmates have been going and also help to decongest the prison.The session which started around 10am and lasted till around 5:10pm at the hall inside the Agodi Prisons was witness by top judicial officers, prison officials, officials of the directorate of public prosecution, lawyers, prosecutors, non government organisations, the police and officials of the Nigerian Bar Association.The CJ said: “We have been able to consider 26 cases worthy of release. 25 inmates were released unconditionally and on the grounds that they have stayed so long through the trial process.

“Three were released on bail to continue their case in court. One was released and the NDLEA should be on his track. That is how far we can go, but because of the number of enormous cases before us, we agreed to come back in  two weeks.”

While speaking on the necessity of the exercise, Justice Abimbola noted that, the exercise which is statutory is expected to be frequent is important and essential to decongest the prison and ensure inmates are given speedy trials.

He added that the exercise which recorded the least number of released inmate in recent time is an indication of caution on the power to release inmates and not do so carelessly.In his welcome remarks earlier, the Controller of Prison, Oyo state Command, Akinrujomu Tosin appreciated the CJ for “coming to perform one of his constitutional duties and decongest the facility by facilitating speedy hearings and justice for cases stalled or that are taking too long in the court of law.”

He said the gesture of the CJ is not only beneficial to the Prison Service but also to the inmates awaiting trials who the law presumed innocent until proven otherwise saying “it will aid then to quickly move on with their lives if speedily acquitted and if otherwise, accept their sentences and fully benefit from rehabilitation, germane to the leadership of the Service.”In a charge to the released inmates, Justice Iyabo Yerima urged them to be grateful to for the privilege and not abuse same by shunning crimes and such other issues that brought them to the prison in the first place.

She pleaded with them to ensure they find good means of livelihood and ensure they contribute positively to the progress of the society.