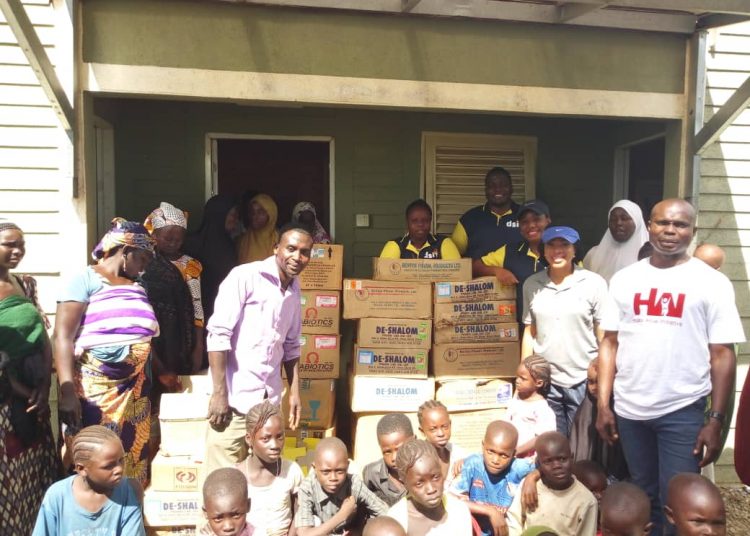 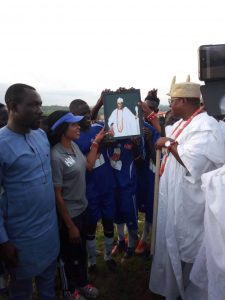 Arole Oodua and Ooni of Ife, Ooni Adeyeye Enitan Ogunwusi, Ojaja II through his Hopes Alive Initiatiatives(HAI) has again taken his charity to the Internally Displaced Persons(IDP) in Wasa, Abuja where he donated several relief materials like food items, drugs and sporting facilities with a view to keeping their hopes alive as bonafide members of Nigerian society. 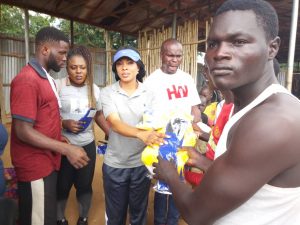 Presenting the relief materials to the people of the IDP camp on Tuesday, the HAI’s Deputy Convener/CEO, Miss Temitope Adesegun stirred the emotions of the internally displaced persons who were moved to tears on seeing the cartons of drugs and Agricultural materials donated to the camp by Ooni of Ife.

The Ooni’s NGO also erected standard football goal posts at the IDP Camp playing ground with jerseys and socks for the players who are mostly youths between the ages of 16 and 25.

Miss Adesegun stated that this gesture of HAI is to bring unity among the internally displaced people in fulfillment of Ooni Ogunwusi’s quest for giving the underpriviledged people sense of belonging in the society as football remains a symbol of unity and love.

“This is our second time here to support you all. His Imperial Majesty loves you all and he will continue to be with you. Though still in seclusion, he still feels the need to extend his love to the less privileged despite his preparation towards the Olojo festival”, she said.

ALSO READ  What is Senator Abdulfatai Buhari's Offence?. By Abiodun Amuda 2A

Adesegun described the African foremost monarch as an incredible phenomenal being whose heartfelt desire is to keep hopes alive.

“It would be recalled that this indefatigable monarch recently donated a vocational centre to the less privileged in Umuahia, Abia State barely two weeks after donating a brand new home to an orphanage in Ibadan, Oyo State through this same Hopes Alive Initiatives(HAI).

Representing the Ooni of Ife at the event, the Asoya of Ile-Isoya HRM Oba Muraina Adedini said the tremendous contributions of the Ooni Ogunwusi to the less privileged in the society is a challenge to other rich people in the country especially those that are in position to improve lives of the masses to come on board and team up with this Initiative of the Ooni putting smiles on the faces of the less privileged.

Also present at the event was a team from an Abuja based NGO, Development Support International(DSI) comprising three medical personnel.

Project Coordinator of DSI, Dr Adebola Odunsi who spoke on behalf of his group emphasised the need to partner the Ooni’s initiative on such philanthropic gesture saying DSI is a non profit making organisation that is in charge of provision and propagation of preventative intervention strategies directed at sustainable development in the health sector.

“We are here because we understand the need and the plight of the internally displaced persons especially looking at it from the health point of view and we feel the need to intervene through the provision of affordable and sustainable medications that will go a long way to ensure mitigation of health stress that the people face in such situation taking into account the common ailments and diseases that are associated with such people”, he said.

Odunsi also stated that his NGO which has been in existence since 2009 is partnering Hopes Alive Initiative(HAI) in providing medical support to compliment the efforts of government and other partners such as the Ooni of Ife to ensure healthy living among the IDPs and put smiles on their faces.

Chairman of the IDP Camp, Geoffrey Bitrus appreciated the Ooni Ogunwusi for his visit through his team, HAI adding that the group was on the camp last year and donated two 3200KVA generators, education materials such as stationeries and school bags as well as health care facilities.
He said the group also promised him last year that anytime he calls on them they will always respond.

HAI responded promptly to my call and erected the football posts with provision of jerseys, socks and football by the Ooni.

This would go a long way in arresting youth restiveness in our IDP camp, it will bring unity among them and reduce emotional and mental stress.” He said.

Mt Bitrus also thanked the Imperial Majesty for the supply of Agricultural materials such as weed controlling chemicals, seedlings, fertilizers among others to aid farming which is the major occupation of the people.

The IDP Women leader, Hafsat Umar thanked the monarch for his kind gesture which she said will go a long way in helping women and children especially pregnant women.

She however lamented that few years back some organizations came to the camp to offer vocational trainings in crafts such as weaving, sewing, bag making, knitting, shoe making among others but no equipment to practice the skills after learning adding that this would go a long way in engaging the women profitably and adding to economic development on the camp.

One Mr Telemu Isah who is in charge of the IDP Camp clinic also thanked the Ooni and said the common ailments found among his people are typhoid, malaria and ring worm adding that the drugs donated by the monarch will go a long way to arrest some of these sicknesses.

The traditional Chief of Wasa Cammunity in Abuja, Mr Yohana A. Ngbako expressed his delights at the Ooni’s initiatives of coming to the aid of his people

“Its a great thing to happen in our lives seeing a king all the way from Yorubaland to look after us here at Wassa IDP in Abuja.” Ngbako said

The highpoint of the visit was a football match organised for the youths on the camp HAI and a portrait of the Ooni of Ife was presented to the winning team which was really appreciated by them as they lifted it up and danced around the camp with it.