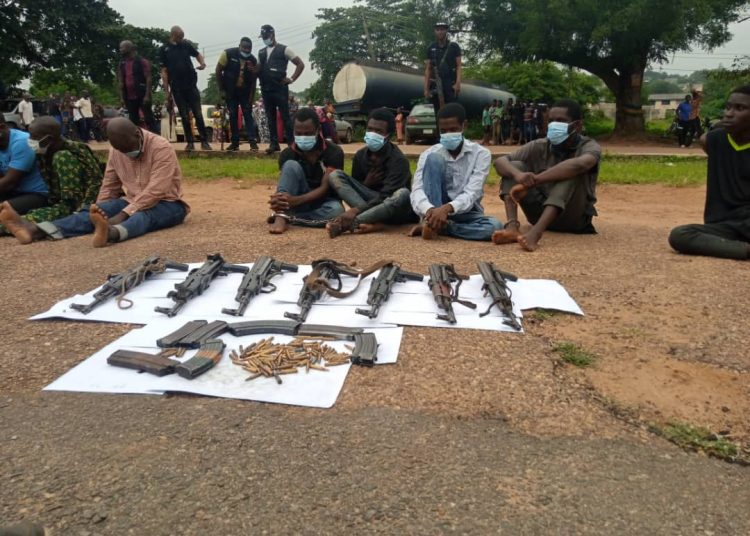 213
SHARES
9.3k
VIEWS
Share on FacebookShare on TwitterShare on WhatsApp

The Oyo State Police Command has arrested eight criminal suspect linked to the incident of the First Bank robbery at Okeho, Kajola local government area of Oyo state and have recovered large numbers of ammunitions.

Nationalinsightnews Recall that armed robber invaded the branch of the said bank at around 4:50pm the evening hours of 29th of July, 2020 resulting to the death of a mobile police on duty, Sergeant Moses Obahi before they blow up the Automated Teller Machine (ATM) and carted away millions of naira from the bank.

The Oyo State Commissioner of Police, CP. Chuks Enwonwu revealed the achievement while addressing Newsmen ar a press briefing and parading of arrested suspects linked with to various criminalities including arm robbery, defilement, kidnapping, and other vices at the force Headquarter, Eleyele, Ibadan.

Azeez Yinusa, and Sumonu Adekunle were also arrested to have helped the criminals to secure a rented accommodation where they lodged for several days before they carried out their dastard act. The police command also arrested Okorie Friday, Nwali Sunday and Akani Olaniyi for looting the huge amount of money and valuables carted away from the bank after the four gang members have been lynched.

ALSO READ  Curfew Now 10pm- 4am in Oyo,Mosques, Churches to operate at 25 Per cent Capacity

CP. Enwonwu further explained that the arrested criminal suspect also stormed the Divisional Police Headquarters in Okeho to as well attack Officers on duty to stop them from foiling the criminal activity adding that four (4) members of the robbery gang had been lynched (set ablazed) by angry mobs before police could get to the scene.

The Commissioner also re – paraded the viral Akinyele serial killer, Sunday Shodipe, who was earlier arrested in connection to the incessant killings in the Ojoo – Moniya – Akinyele axis of Akinyele Local Government and later escaped the Mokola divisional police headquarters, Ibadan on the 11th of August, 2020.

The 19 years old Sunday, after series of effort from Police tactical squad and a Manhunt team from Ondo state was however rearrested on the 23th of August, 2020.