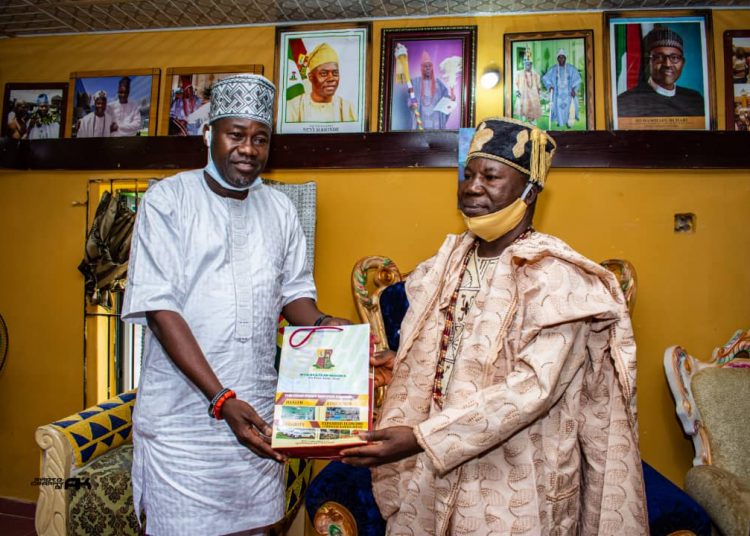 781
SHARES
3.3k
VIEWS
Share on FacebookShare on TwitterShare on WhatsApp

The Oyo State Governor, Engr. Seyi Makinde has been commended for the steps taking so far in fulfilment of his electioneering campaign promises geared towards the development of the region in the state. 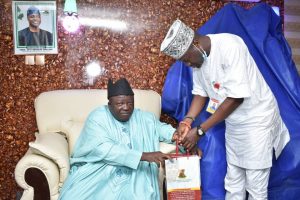 This commendation was given by the Aseyin of Iseyin, Oba Abdulganiyy Adekunle Ologunebi Ajinese, the Alado of Ado Awaye Oba Ademola Folakanmi and the Okere of Saki, Oba Khalid Oyeniyi Olabisi Ilugbemidepo while hosting the Special Adviser to the Governor on Culture and Tourism, Hon. Ademola Akeem Ige and his entourage in their respective palaces on Monday.

Hon. Ige was at the palaces of the three foremost traditional rulers as part of his visit to Oke Ogun zone to carry out an on the spot assessment of tourism sites in the zone and to intimate them of the government’s plan to promote tourism in the area in particular and Oyo State as a whole.

The monarchs in their separate speeches, appreciated the Moniya-Iseyin road being constructed by Governor Seyi Makinde led administration stressing that road network is central to tourism development in Nigeria.

According to them, “we want to thank the Governor for giving us what will make our tourist centres ideal to world tourism. Road network is an important issues and we’ve been suffering for bad road from Ibadan despite the fact that our tourism sites have been known in the world, the limitation is road network.”

“When the Governor made a pronouncement that he was going to construct the road, we thought it was going to be business as usual (failed promises as it was in the past government) but the road is almost completed and now, we don’t spend more than 45 minutes for the journey that used to take us over two hours before despite the fact that it has not been completed.”

“With Gov Makinde’s development strides in this area and many others in Oke Ogun, we have no doubt that Oyo State will soon become a centre of tourist attraction in Nigeria. The whole of Oke Ogun appreciate the Governor for the job well done and we pray God to grant him an enablement to accomplish his vision for the State.”

But the Alado of Ado Awaye, Oba Ademola Folahanmi specifically commended the Governor for fulfilling another promise he made to the town during his electioneering campaign in the build up to the 2019 gubernatorial elections to restore the electricity they had suffered for, for almost three years in the town.

According to him, “Ado Awaye had been in black out for the past three years. When the Governor was campaigning here in my palace all of us had agreed that we were not going to make any demand except the issue of our electricity. I’m happy to inform you that last Saturday, he has signed and approved the restoration of our electricity. We appreciate him for both the road, the light and everything. He is a listen Governor and he did this without being reminded again”.

The monarch who used the occasion to congratulate Hon. Ademola Ige on his appointment, eulogising him for performing exceedingly well during his tenure as council chairman.

He said: “I was one of the beneficiaries of your good governance as a council chairman when I was living at Oju odo academy Ibadan even though you don’t know me then. You never underrated anybody in terms of your developmental programmes. You touched the lives of every community in your local government. Today, I am a royal father! Had it been you had done a wrong thing when I don’t even think I would be a king this is how I would be saying it. You are one of our pride and I am so happy for you.”

Oba Ademola Folahanmi thereafter led the team on a walk tour to the Iyake suspended lake on a journey that took almost three hours with detailed history surrounding the historical site.

While appreciating the traditional ruler and others for the warm reception and hospitality accorded to him and his entourage, Hon. Ademola Ige hinted that he was at the zone to pursue the vision of Governor Seyi Makinde to develop some tourist centres in the State.

According to him, “Ado Awaye is one of the major tourist sites we have in the world. We are here on the on the spot assessment so as to know what to do to uplift and bring development to the centre and others. The Ado Awaye is among several tourist sites that are very important to us. It remains the only suspended natural lake in the whole world. As a result of this, it is very important to the government of Oyo State. Very soon it will become a major tourist attraction to the whole world.” Hon. Ige declared.

Others who accompanied Hon. Ige included a member of the Oyo State Tourism Board, Ms Sarah Sobowale, Deputy Director of Tourism from Ministry of Information, Culture and Tourism, Mr Mayowa Fagebo, and Erelu Funmi Rotiba, cultural ambassador and state coordinator of federation of tourism association of Nigeria, among others.