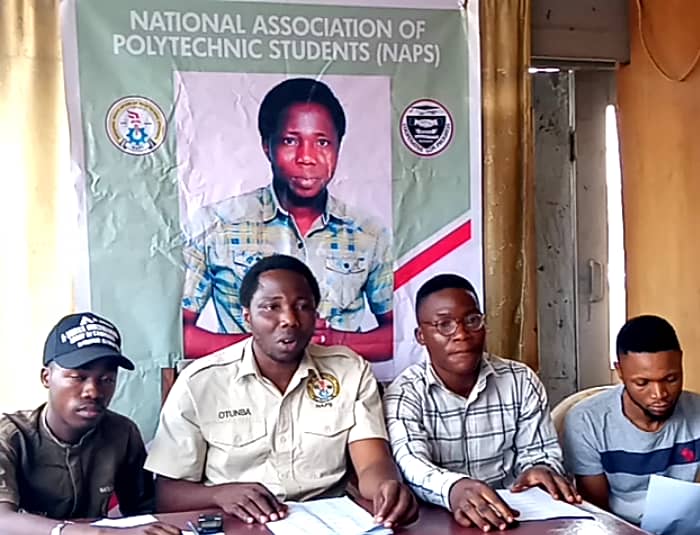 The newly emerged president of National Association of Polytechnic Students(NAPS), Comrade Olalere Benedict Adetunji has dedicated his victory to the late students of the Federal Polytechnic Offa who lost their lives in a fatal accident.

The dedication of victory to the late polytes was revealed during the maiden official press briefing that took place at the Federal Cooperative College, Eleyele Ibadan, the capital of Oyo State on Monday, December 2.

In his grief, Adetunji commiserated with the students’ community of the Federal Polytechnic Offa over the demise of the students who gave up their lives through a fatal accident on their tour to serve their motherland, with solidarity to the community he was elected to represent, he dedicated the victory at 2019 NAPS’ unity convention to the illustrious late members.

On appreciation, he lauded his co-contenders, the runner up and those who voluntarily stepped down at the floor of 2019 convention whose names are ranged from Akogun Ijaduoye Olasunkanmi, Adekambi Sunday among others respectively.

He added that the winning was for all as there were no winners and losers, calling on stakeholders, his institution(Federal Cooperative College, Eleyele,Ibadan) and others whom he believes in their charisma, mission and vision to support him, so as to take the union to an enviable height.

He however appreciated Governors Seyi Makinde and Godwin Obaseki of Oyo and Edo States over the attainment of quality educational system and promotion of students unionism on campuses of their respective states and also the Commissioners for Youth and Sports in Oyo, Comrade Seun Fakorede and his counterpart in Edo State for doing wonderfully well in their ministries.

In another development, he called on government to put much more consideration and seriousness on polytechnic education which he described as the bedrock of the technological and practical excellence,adding that the government needed to adhere strictly so that the dream of production and use of locally manufactured products would be easily attained.

Adetunji called on polytes and entire Nigerians to support President Muhammadu Buhari on the task of fighting corruption which he described has become a cankerworm in the society, adding that if Buhari is supported all heinous crimes would be brought into minimal level.