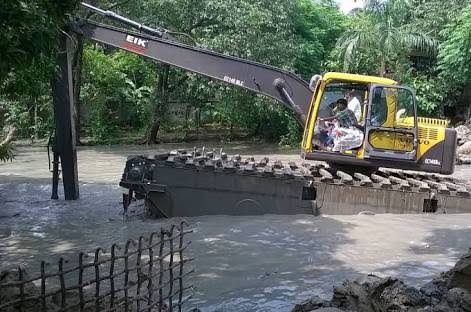 Oyo State government has disclosed that it would soon begin channelization of major rivers in the State to increase flood water runoff capacity and further reduce possibility of flooding in the State.
The disclosure was made on Monday by the State Commissioner for Environment and Natural Resources, Hon. Kehinde Ayoola when he was addressing a Press Conference at the organized by the Ministry to sensitize the general public on the hazard of poor sanitation on the environment and warning alert on flood in the State.
The event which held at the Film Theater of the State Ministry of Information, Culture and Tourism in Ibadan was also attended by the Commissioner for Information, Culture and Tourism, Dr. Wasiu Olatunbosun and the Chief Press Secretary to Governor Seyi Makinde, Mr Adisa Taiwo.
Ayoola said Governor Seyi Makinde has approved the establishment of four environmental tribunals that would work across the State to enforce the State environmental laws and thereby reduce the rate at which people violated the laws.
“The vulnerability of Ibadan to river and urban flooding is induced by the city’s topography terrain, the problem of indiscriminate waste disposal, building of houses on flood plains, with the tendency of all the foregoing even being aggravated by the universal menace of global warming and climate change.
“It is in the light of this that the government of the day in Oyo State has expressed its unreserved commitment to the full implementation of the Ibadan Urban Flood Management Project, the State-owned flood risk mitigation project with funding and technical assistance from the World Bank.
“The proposed channelization of major rivers and water channels in Ibadan under the IUFMP scheme is being processed and would soon commence. These include River Ona, Agodi Channel, River Ogbere, Kudeti Channel etcetera. When completed, these massive channels, which are in the mould of the popular Ogunpa Channel, would boost the flood-water runoff draining capacity of the city.
“However, all the above-listed efforts would amount to nothing without the people of the State fulfilling their own part of the bargain. Our people are required now, more than before, to clear their surrounding and street drain channels, avoid dumping waste improperly, ensure that each household keeps a dustbin and patronize government-approved waste disposal contractors, avoid floodplains, obtain building approvals from relevant statutory bodies before commencing building, among others.
“The governor has approved the establishment of four Environmental Tribunals across the State that will see to immediate dispensation of justice to environmental law offenders. The Tribunals will soon be inaugurated by the governor. This, we believe, will strengthen the enforcement of the laws and change people’s attitude towards sanitation for the better,” he pointed out.
The former lawmaker called on the people to take necessary precautions during heavy rainfall, especially when the rain persisted for over twenty minutes, while those living in the houses along floodplains were advised to relocate.
He added that low bridges should be avoided during heavy rain and enjoined the generality to keep away from staying under high tension electricity installations.
ALSO READ  Aresa of Iresaadu Is Dead

Lindelof Extends Contract With Man U