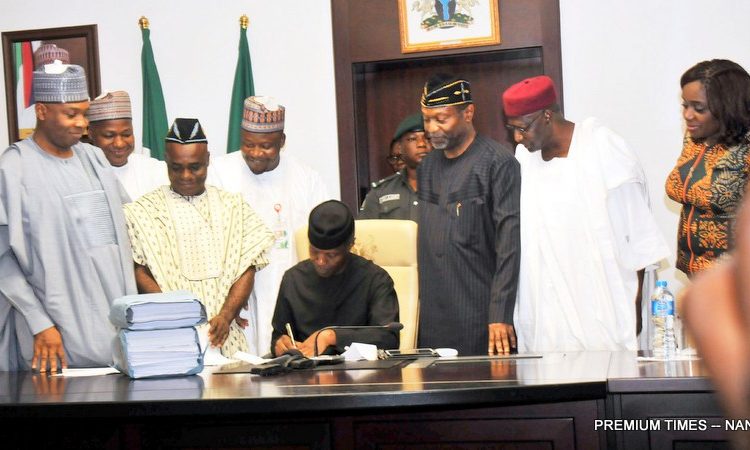 Few weeks after the National Assembly submitted the 2017 budget to the presidency Acting President Yemi Osinbajo today signed the 2017 appropriation bill into law.

The total budget figure signed is put at N 7.44 trillion.

Present at the signing of the Bil were Chief of Staff to President Muhammadu Buhari, Abba Kyari; Senate President, Bukola Saraki, Speaker of the House of Representatives, Yakubu Dogara, Ministers and other top government officials.

. Osinbajo said his signing of the budget was a milestone in the implementation of the economic and growth plan programme put in place by Mr. Buhari in April.

He said the processes of putting the budget in place had been smoother than that of 2016 with no allegations of errors.

“There were far few cases of acrimony unlike in the past. There is no doubt at all that our democracy is maturing very well,” he said.

The National Assembly passed the 2017 Appropriations Bill on May 10 after raising from the N7.28 trillion earlier proposed by President Muhammadu Buhari in December last year, to N7.44 trillion.

President Buhari is away in the United Kingdom for medical treatment.

It is the first time in recent years that an acting president would sign the budget into law.