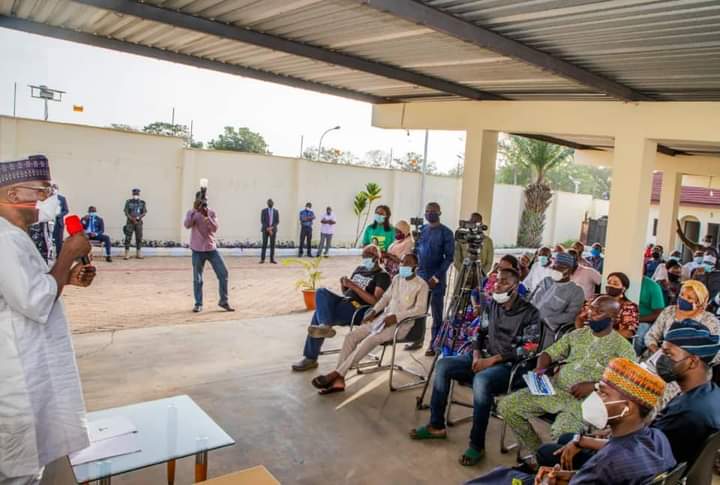 394
SHARES
5.2k
VIEWS
Share on FacebookShare on TwitterShare on WhatsApp

Kwara State Governor AbdulRahman AbdulRazaq has met with owners of the businesses affected in the Friday looting of public and private properties, assuring them of government’s support to get them back on stream.

In a meeting with owners of the businesses late Monday, the Governor urged them to register on the state website as they had earlier been advised and said modalities are in place to ensure that only people with genuine cases benefit.

“Your sector is really important to this government. That is why we decided to engage you when we saw what happened to bring you back as quickly as possible,” he said, reiterating that small and medium scale businesses are key to economic development.

“On our part we have the modalities for what we want to do. That is why we asked you to go to the website and fill the form. We mentioned a number as the amount to assist you. It could be more than that. It may be lower than that. But that is the benchmark. When we look at the data you send in and your claims, we will decide who to give grant to and those we will give interest-free loan to.

“We are also talking to one or two banks to make funds available for interest-free loans, with long term repayment plans.”

He condemned the attempts to politicise the incident from some quarters, adding that whatever political ambitions anyone may have are achievable only in a stable and peaceful environment.

Commissioner for Communications Harriet Afolabi-Oshatimehin also sympathised with the business owners and assured them of government’s support to get back to business.

“The incident is of great concern to the government. Such habit is not known with our state, Kwara. The government will continue to engage the affected business owners of the appropriate method of securing the assistance of the state government,” she said.

The meeting was also attended by former House of Representatives member Moshood Mustapha and businessman Alhaji Janni Ibrahim who both sympathised with the victims and announced a donation of N1m each for the victims.

Mustapha described the looting as an economic sabotage against the state and insisted on the government bringing the looters to book.

He commended the Governor’s handling of the situation which has brought the state back to normalcy within two days.

Ibrahim, for his part, lauded the Governor for the prompt response and sincere commitment to healing the wounds of the victims.

He urged the business owners to stand firm and not be deterred by the looting and destruction of their properties.

Speaking on behalf of the business owners, Ahmed Lawal Ahmed appreciated the governor for his prompt intervention. He said the government’s intention to make fund available for them is a strategic move to restore their glory.

He requested the government to include some of their members in the disbursement committee to ensure coordination and transparency.