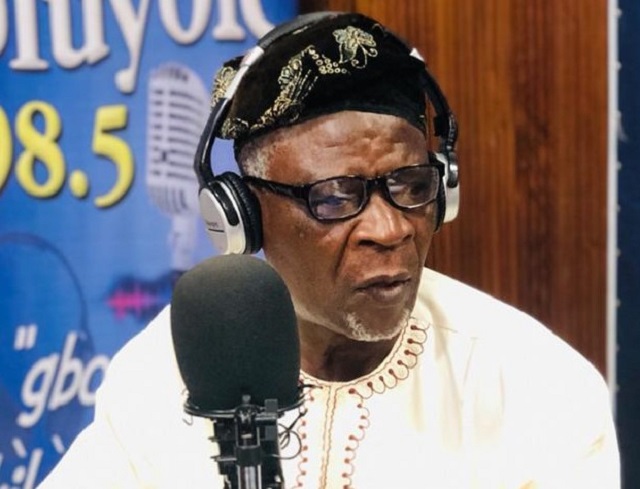 42
SHARES
2.9k
VIEWS
Share on FacebookShare on TwitterShare on WhatsApp

Popular veteran Juju musician, Uncle Toye Ajagun has hit hard at K1 de Ultimate, Wasiu Ayinde Marshal and others like him who have infused different guitars into their fuji musical arrangements saying that they have deviated from the ‘standards.’

He added that the introduction of string instruments by these fuji musicians is a total departure from the standard laid down by the creator of fuji music, late Sikiru Ayinde Barrister.

The Veteran musician disclosed all these while featuring on a weekly radio show, Parrot Xtra Hour on Radio’ anchored by Olayinka Agboola and broadcast live on the Broadcasting Corporation of Oyo State’s Oluyole 98.5 FM, Ibadan, the state’s capital on Monday evening.
Toye Ajagun also revealed that Juju music in Nigeria is not dead, saying it is still potent and meaningful as it was in the past decades.

He said the advent of Fuji music has not overshadowed Juju music in the country saying “It is a mistake and wrong assumption if we say Fuji has swallowed Juju music.”

Ajagun continued “Wasiu Ayinde Marshall knows that Juju music in Nigeria is not dead. He still gives us our due respect. I listened to one of his recently released albums where he praised me, King Sunny Ade, Idowu Animashaun, Ebenezer Obey and others”.

The Egba-born musician also revealed that his own style of music is aimed at promoting peace and love among his followers and listeners in the country.

He said “I use my music to promote peace; I do not use it to cause acrimony among people”.

He used the opportunity to discuss the album he released in 1976 which he said was targeted at restoring the sour relationship between two top juju musicians of that time, Admiral Dele Abiodun and Emperor Pick Peter.

The ‘Magbe Magbe’ creator also revealed how he got into the music industry saying that it was through the efforts of Idowu Animashaun, who is now a pastor in Ibadan.

“I saw him carrying a guitar round his neck one day and I approached him that I was interested and he took me to Ogunmokun, Mushin where the training was being held. It was from there that I started to play Konga drum and from there my skills were sharpened on how to play and sing till today’’.

The Veteran musician also took time to praise iconic singer, Dr Yinka Ayefele who was once his ‘bandboy’ saying “He is a well-trained son who has distinguished himself in his chosen career. I am happy for him; he is a good son to me and he is paying his dues and He has never disappointed me.

“You see, in those days, he used to be a very lean young man. In fact, I used to beg him not to join others to carry our speakers. I never knew he could grow to put on weight,” Ajagun added humorously.

When quizzed about his embarrassing moment in the industry, “I am always embarrassed when we arrive late at shows due to delays caused by break-down of our vehicles. Even with that, we always used to make it up for our clients once we settled down to work.

The Egba born musician also discussed his happiest moment saying it was the day he bought his first official vehicle, a civilian bus in 1976.

He assured his numerous fans to expect him in the studio soon as plans are in top gear for the release of his next album.