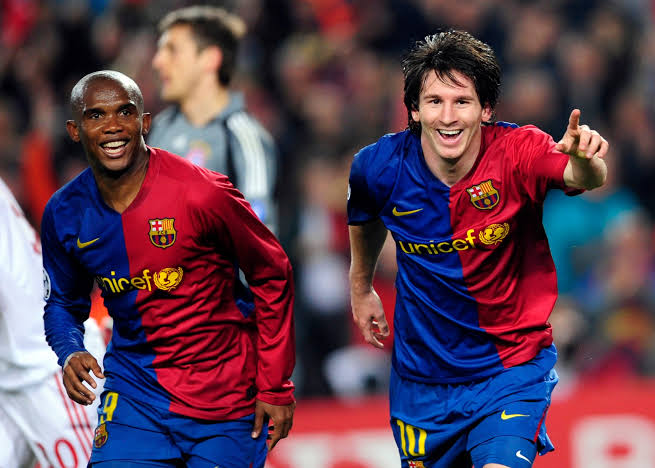 African Star Footballer of All Time, Samuel Eto’o has expressed his delight to see World Best Player, Lionel Messi stays in Barcelona after weeks of controversy on if he will leave the club or not.

Cameroon Star, Eto’o is pleased to see Lionel Messi, a man he considers to be “like my son”, staying at Barcelona but admits the Camp Nou giants are going to need much more than the mercurial Argentine in order to become competitive once again.

Eto’o is relieved to see a player he once played alongside committing to the only club side he has represented across a remarkable career to date.

The legendary former frontman is, however, aware that Messi cannot continue to carry Barca by himself.

“Messi is like my son. He has stayed and so I’m happy,” Eto’o, who spent five years at Camp Nou between 2004 and 2009, told reporters at a La Liga promotional event.

“But the heart of this team needs more Barcelona-style players, players who are tiki-taka, not box to box.”

Eto’o believes there are others on Barca’s books that are capable of providing inspiration, with the Cameroon icon stating his desire “to see a great (Sergio) Busquets at his best level again.

“When he is, Barcelona always win titles.”

While calling for more from the Blaugrana, who are now working under new boss Ronald Koeman, Eto’o believes 2020-21 can see the Catalan giants restore domestic dominance in Spain.

He added: “Barcelona is going to be the next league champion, but I want Mallorca, the team of my heart, to return to the top tier.”

Barcelona will take in their first outing under Koeman on Saturday, a friendly date with Gimnastic, before opening their La Liga campaign against Villarreal on September 27.