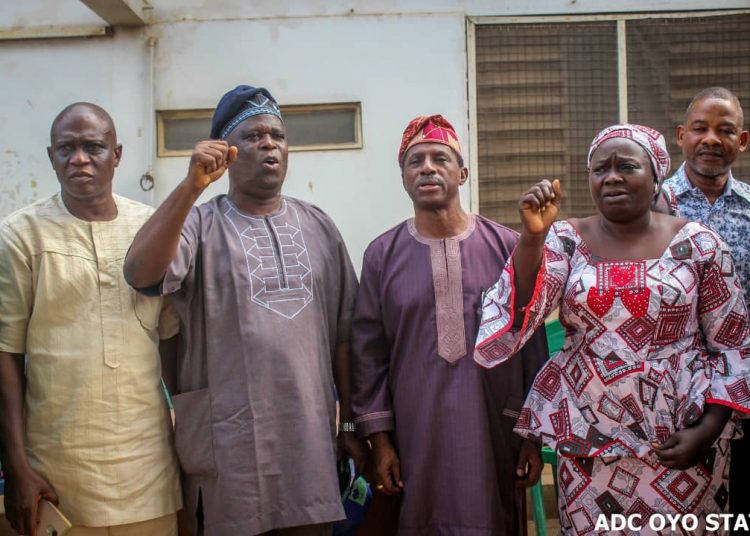 Senator Olufemi Lanlehin, Oyo State ADC governorship candidate, has assured workers in the state of his readiness to pay N30000 as minimum wage.

Lanlehin gave this assurance on Thursday, in Ibadan, the state capital, while interacting with members of the Nigerian Labour Congress (NLC) and its sister union, the Trade Union Congress (TUC).

“We will run a people centred government, prioritising payment of salaries, pensions and gratuities, and giving our workers, the pride of place,” Lanlehin said.

The interaction afforded the Oyo State ADC governorship candidate the opportunity of answering questions, after his presentation; ranging from his plans for workers, and their welfare, as well as on improving the state’s revenue base.

“When salaries, pensions and gratuities are paid as and when due, the multiplier effect permeates the entire society, and the people are motivated to pay taxes. That way, the state’s revenue base improves.

When government blocks all loopholes, and stops all bogus contracts, Lanlehin added, there is money to improve the lives of our people.

“We will ensure our workers are in charge of revenue collection, as we’ll stop the use of consultants, who repatriate a sizeable portion of whatever they generate.

That way, they’ll know what the state generates, and will be better informed, especially when agitating for improved welfare,” Lanlehin explained.

“We trust with our intended style of openness, probity and accountability, labour will have less struggles to undertake during our regime,” he concluded.

The workers who expressed confidence in Lanlehin’s ability to turnaround the fortunes of the state, implored him to take to heart, all promises made.

Also on Lanlehin’s team was Comrade Alamu Oloyede, a former Oyo State NLC Chairman, who is also an ADC Chieftain.

Oloyede, in his brief remarks appreciated Lanlehin for his integrity, saying he knows that with such a man in position of authority, “Oyo State and its workers were in for good times.”

Oyo State NLC Chairman, Comrade Abdulwaheed Olojede explained that the state labour centres elected to interrogate governorship candidates to ascertain their plans and programmes for workers, their manifesto for the state at large, and in order to participate as responsible members of the society in the political process, urging Lanlehin, and others who have so far participated to always prioritise the welfare of workers in all they do.