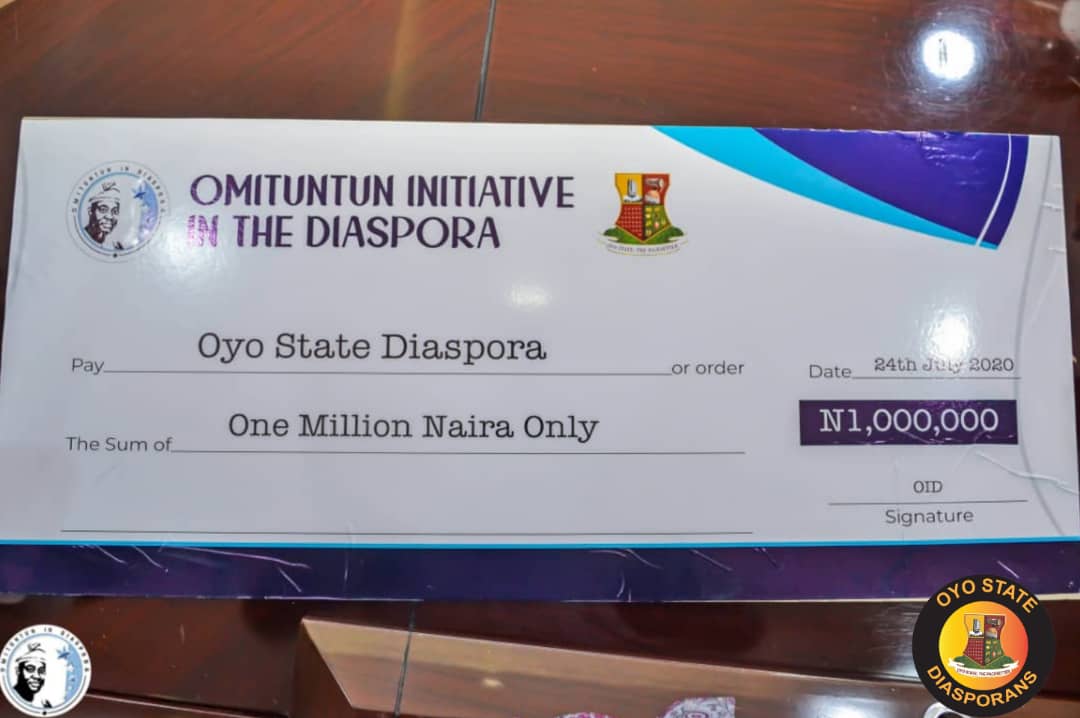 A group of professionals known as OMITUNTUN IN THE DIASPORA has kickstarted the fund raising appeal, which is an initiative of the Senior Special Assistant to the Governor on Diaspora Affairs to raise funds for trafficked victims in Lebanon who are indigenes of Oyo State.

The group yesterday donated one million naira as their contribution to the fund raising which would be channelled to the repatriation and rehabilitation of trafficked victims.

Speaking at the presentation ceremony, the Chief of Staff to the Oyo State Governor, Chief Bisi Ilaka who also doubled as the Chairman of the occasion appreciated the donor for their contribution towards alleviating the suffering of other harpless citizens being trafficked in other countries.

He thereafter, presented an appreciation award to the group on behalf of the government.

In her remark, the Senior Special Assistant to the Governor on Diaspora Affairs, Hon. Bolanle Sarumi Aliyu said that
the government under Engr Seyi Makinde led administration is determined to ensure that no citizen of the State suffers anywhere in the world irrespective of their age, sex or religion affiliation.

According to her, “as we speak, there are about 141 stranded Nigerian ladies in Lebanon, 41 of them are indigenes of Oyo State who want to return home. We would need kind hearted indigenes from Oyo State and Nigerians all over the world to donate so we can bring the 41 victims back home and get them rehabilitated and empowered.”

She added that whatever amount realized from the fund raising would be channelled to the repatriation and rehabilitation of the victims who are currently suffering from psychological trauma in Lebanon and therefore desirous to return home.

While appreciating the Omituntun in the Diaspora for being the first group to donate to the cause, Hon. Sarumi Aliyu called on other well meaning individuals and groups to come to the aid of the victims by reaching out to government through her offfice for more details.

In a related development, an Ogbomosho born France based tourism and hospitality expert, Mr Adebayo Sola and his team have presented Oyo State logo moulded in ceramic form to the Oyo State Governor, Engr Seyi Makinde through the office of the Senior Special Assistant on Diaspora Affairs.

While showcasing the artworks made in ceramic which included the Nigeria coat of arms to the SSA, Hon. Sarumi, Mr Adebayo Sola who is the Chief Executive Officer of D.C.T. Travels and Tours limited explained that the rationale behind making the ceramic logo of Oyo State is that any artwork made with ceramic cannot break and that is the latest practice in the world unlike the ones made in paper form which can easily break and fade away.

According to him, we’ve found out abroad that any artworks that symbolizes the country or state is no longer made in paper form but now being moulded with ceramic. This is the new practice in the world. So, we have come to showcase what we have done as samples to the government that is beautiful, unique and more presentable. We want the government to examine what we have done and encourage us as citizens of this state.”

In her short remark, the Senior Special Assistant on Diaspora Affairs to the Governor, Mrs Bolanle Sarumi lauded the initiative of the team for coming up with a unique idea on Oyo State logo moulded in ceramic form and promised to present their proposal to the Governor.