The Majority Leader of the House of Representatives, Femi Gbajabiamila, has appealed to the leadership of the ruling All Progressives Congress (APC) to give special consideration for experienced lawmakers ahead of the party primaries.

Gbajabiamila made the appeal on Thursday when he led APC House Caucus to a meeting with Comrade Adams Oshiomhole-led National Working Committee (NWC) at the party’s National secretariat in Abuja.
He called on the party leadership to appreciate the legislators who had remained steadfast and committed themselves to the ideals of the party despite sharing in the grievances of those who had left.
He claimed that some of the lawmakers, who resisted what he called “the abysmal and failed attempt to turn APC into a minority in party in the house and senate” also rejected the promises of mouth-watering cash plus automatic tickets being offered by the opposition.
He said, “It is a time to consolidate and make sure we stay in touch with our members, keep them close, continue to appreciate them, and continue to fight for these members. A lot of them are first timers, that only is a case to make.
“If you want this country to progress, we can continue to turn members around – first timers who have acquired experienced to become ranking members and have represented the party at the grassroots level. They should be taken into serious consideration and I think they deserve a second term.
“Because if they don’t come back we are going to lose the first six months to one year training the freshers.  How does that help the party? How does that help the country?” said the house majority leader.
Gbajabiamila added, “I was on Channels TV yesterday (Tuesday) with the PDP publicity secretary and it made my heart bleed by the way politicians were described in a term analogous to farming. He said this was a harvest time as if it was a harvest of corn, rice and maize. The APC is not for harvest.
“Mr chairman, they are poaching members and they will continue to poach. I have heard and even ashamed to say it that members are being offered mouth-watering figures in terms of cash and I say mouth-watering and members have rejected those cash. Mr chairman, not only are they being offered mouth-watering cash, but they are being given automatic tickets and I say to members, the people who are complaining about internal democracy. In APC, a complaint I do not agree with. How come they are offered automatic tickets and they accept? What are they complaining about in the other party? “Our members have settled their deceit because that is what it is and I can guarantee that the automatic ticket is just a mirage. They will not be given and I can guarantee that. Mr chairman, what we are seeing is the euphoria of the decamping and it has not died down. Even in 24 hours, some are even regretting, we are beginning to see people come back after seeing the handwriting on the wall that it came and just left like that.
“So, Mr Chairman, we are blessed that some people left thinking that the pasture was greener on the other side, some are coming back seeing that the greener pasture was not that green. We must consolidate and hold out positions very tight.”
The majority leader, who introduced Rep Olamide Oni, a member from Ekiti State that just joined the APC from the Social Democratic Party (SDP), underscored the need for the party to develop and entrench its ideology in the hearts and minds of every progressive member of the party to avoid frequent defections.
The APC National Chairman, in his reaction, assured them that the party would not neglect the experienced lawmakers.
Oshiomhole said the party would make efforts to retain seasoned legislators with value.
ALSO READ  New era: What Ekiti People Need, What Fayemi can Give 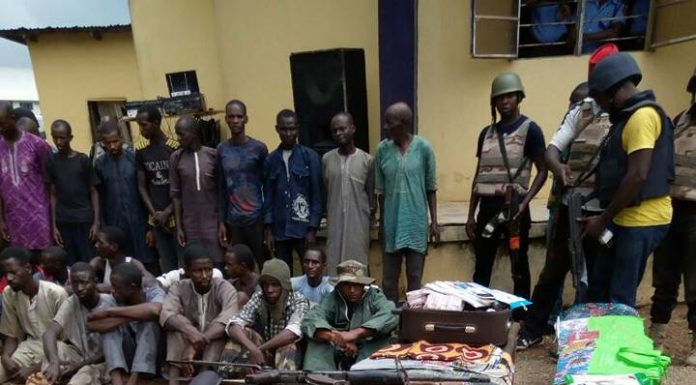 Oyo 2019: Federal Lawmakers Back Senator Buhari’s Gubernatorial Ambition, Says He Is The Most Competent To Succeed Ajimobi